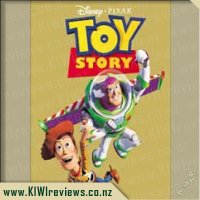 The delightful TOY STORY provides the answer to a kid's most important question: What happens when you leave toys alone in a room? Well, it seems that they come to life! Young Andy's playthings, including the sardonic Mr. Potatohead, a Slinky Dog with a southern drawl, an anxiety-ridden dinosaur, and some very gung-ho toy soldiers, are led by Woody, a pull-string cowboy doll whom Andy adores. But on his birthday, Andy receives a self-possessed, gadget-laden spaceman action figure named Buzz Lightyear, who quickly becomes Andy's favorite. Soon the overlooked Woody becomes very jealous. But when a turn of events leave Buzz and Woody lost in the "outside world," they have to get along in order to find their way home. And they'd better do it quickly, because the lad and his family are moving tomorrow! However their trek is interrupted by Sid, Andy's cruel, malicious neighbor--who loves to destroy toys...

This is one movie that was recommended we watch as a family as I have young kids but due to costs I waited until this was on DVD and take a leap of faith and buy it for us to watch. It was an immediate hit with the kids, they loved how the toys come to life and as an adult I thought it was great that the toys had their own problems and issues to over come.

The animation was great, the toys looked so life like and the music was great, the songs were sung along with and the kids associate some of the songs with the movie so when they hear it I get asked if they can watch the movie again. The voices were incredibly well done. Some of my favourite scenes were when Buzz and Woody learn to like each other and work together and Woody teaches Sid a lesson that he will never forget.

I would highly recommend this movie to others with young kids as it encourages the kids to use their imaginations and do some really great role play. Another good thing is the toys based on the movie so the kids can pretend to be one of Andy's toys. This was a movie that I was dying to see in the cinemas. It came out around the time of my 5th birthday and I was looking forward to seeing it with my friends. But they had already seen it, so I got taken to see 'Jumanji' instead, which scared the heck out of me.

But Toy Story is not scary by any leap of the imagination. It is a great colourful children's film, that makes you wonder what your own toys do when you are not around. It was a great film, and I loved the small quirks, like Mr Potatohead losing his parts, and the toys 'playing dead' whenever Andy (or any other human for that matter ) is around.

It opens the imagination up to a whole new realm of possibilities, which is what a good film needs to do. It was a little bit too predictable at times, as you immediately know the general plot to the film as soon as the second lead character enters the film. But most of the children can't pick up on these things, so it's still delightful to them.

The great thing that I like about this film is how it sends your imagination wild, and it gets the kids excited about playing with actual toys (and not needing a screen in front of them all day). A great wholesome family film.

I'm sure that there are plenty of children who have at one point or another pretended that their toys are real, with full personalities and lives, not just when we play with them but when we're not there, just what do our toys get up to? Toy Story does just that and I love how it starts off with the current toys busy trying to see what Andy is getting for his birthday and if their position is compromised. Jealousy rears its head as Woody feels that he is loosing his place as number one (both with Andy and the other toys) and thus the drama and fun begins.

This is so well done, you can believe that all of these toys are alive and have a life, within the home, outside of being played with my Andy. The terror in this movie comes from the next door neighbor who likes to pull his toys apart (or steal his sisters toys) and turn them into toys that would be befitting of a horror movie. There is plenty of laughs here for everyone, this came out when I was a child and it is just as much fun now as it was then, plus the few 'adult' jokes that I can now see and enjoy and my kids are getting fun out of this now.