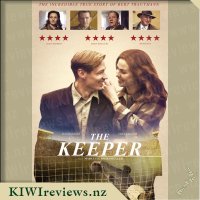 Disclosure StatementFULL DISCLOSURE: A number of units of this product have, at some time, been supplied to KIWIreviews by the company for the purposes of unbiased, independent reviews. No fee was accepted by KIWIreviews or the reviewers themselves - these are genuine, unpaid consumer reviews.
Available:
In cinemas August 2019

The Keeper tells the extraordinary true story of Bert Trautmann (David Kross) and his journey from German PoW to a career with Manchester City. It traces his adjustment to living with his former enemies, his marriage to Margaret Friar (Freya Mavor), and his rise to stardom in his adopted country.

This inspiring film has something for everyone - from sports fans to those who just love a good romance.

There are some movies that grab your attention from the very start, and The Keeper is one of them. The opening sequence is all-action, depicting a battle which resulted in a number of deaths and many more taken prisoner - of whom Bert Trautmann (David Kross) was one. I had no idea what the movie was going to be about when I first went into the cinema, but it didn't matter: I was instantly caught up in Bert's story and just wanted to find out what would happen next!

The story follows his life as he is spotted by the manager of a Lancashire football team and recognised as a player of exceptional skill. He leaves the PoW camp and given the task of playing goalkeeper for the team - an assignment which causes the rest of the team to rebel as they do not want to play with the enemy! However, the team manager (Jack Friar, played by John Henshaw) is adamant that Trautmann is their only chance of winning, and digs his heels in until the rest of the players agree. As time goes on, the rest of the players gradually come to accept him despite their initial prejudice. It helps that Trautmann is portrayed as being genuinely sorry for his part in wartime killing; as a member of the Luftwaffe, it was his job as a soldier to obey the orders of his commanders. He does not try to hide what he has done, and takes responsibility (and expresses remorse) for the civilian deaths that have been due partly to his actions.

Jack Friar's daughter Margaret (Freya Mavor) befriends Trautmann and before long it is clear that they are destined to marry. Friar and his wife Clarice (Dervla Kirwan) give their blessing to the couple, and when Trautmann is head-hunted for Manchester City, it is the Friar family - especially Margaret - who are his strongest supporters when the newspapers attack him for being an enemy in their midst. Accusations of anti-semitism and murder fuel the anger. However, a local rabbi (Rabbi Altman, played by Butz Ulrich Buse) reverses the attacks by speaking out against the attackers and calling for a charitable attitude towards a man who has already expressed his regret at his own contribution to the war, and has been rebuilding his life by giving what he can to his adopted country.

Although this movie is on the surface the biopic of a sports star, and the viewer might therefore expect to see plenty of on-the-field action, the themes go far deeper. When Trautmann is asked why he volunteered, his response is that he was very young - just 17 - and that it seemed like an adventure at the time. There are flashbacks to his time in Germany, some to incidents that happened after he joined up, and others to events in his childhood: these flashbacks underline his intense love for sport, but also his natural empathy for his fellow humans. One event, the murder of a child by a callous fellow-soldier, haunts Trautmann throughout his life.

Another theme is that of contrition and retribution. The scene in which it appears that Trautmann is about to be lynched because of his involvement with genocide in his own country and the bombings that killed innocent people in Manchester, the very city he is now representing as an elite athlete, is balanced by another where his supporters - notably his wife Margaret - speak of the way he has attempted to turn his life around by having the courage to take responsibility for his actions. Rabbi Altman's reminder to the people to learn from past mistakes rather than react to them also helps to reverse the fury of the mob.

I liked the way lighting was used to enhance mood in the movie. Some of the urban scenes filmed in England were shot in low light to represent the starkness and general poverty of the city streets. Interiors, also, were dimly lit to reflect the depression of the time. Post-war England was still a place where many luxury items were not available, and not all rooms had electric light. Rationing was still in place, contributing further to the lack of colour. It seemed as if the whole country was bathed in grey, only to come alive when the team ran out on to the soccer field!

I recommend this movie without reservations. Having gone into the cinema with no expectations and no background knowledge of either Manchester City or Bert Trautmann, I felt I learned a great deal in two short hours. As a matter of note, the movie was filmed in Germany and Northern Ireland, not Manchester - presumably because the Manchester of today is so different now!

Welcome to the deadliest game you'll ever play. Colm Feore and Matt Lanter wage war against state-of-the-art defence technology in this riviting sequel to the thrilling Wargames. Charged with explosive action and non-stop thrills, this movie is as pulse-pounding and fun a ride as the original, while delivering a few contemporary twists that will keep you on the edge of your seat.

When Will Farmer hacks into a resticted ... more...