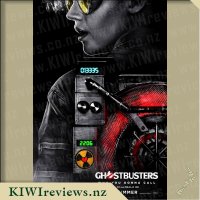 I grew up with the original Ghostbusters films, and enjoyed them greatly at the time, so when I head about a remake I was excited, and even more so for the potential that it had with four leading ladies. With the news though, came a huge uproar from people who thought this would "ruin their childhood" etc. well sorry folks, but nothing ruined here, especially if you can go in with an open mind.

The premise of the 2016 film is similar to that of the original, and we end up with a team of four women who, first, are trying to prove that ghosts are real, and of course when they do, they have to defeat the main protagonist of the film. I went to see this with my mother and three kids, it was a surprise for the kids and their excitement when they figured out what we were seeing was audible at the other end of the mall. The movie starts straight into the action, giving us a ghost encounter within the first 5 minutes and it had the kids all jumping and delighted at the same time.

The beauty of a reboot is that we get to have new backstories and the characters weren't being compared to the original team within the realm of the movie. There are plenty of jokes along the way and of course, nods to the original films, even having the previous actors in with small roles (the biggest being Bill Murray, but no Rick Moranis who has retired). The special effects are really good, though do get a little patchy in the final fight scene, but I have seen far worse in a film.

Stay till the end of the credits, Ghostbusters follows the line of many other films now, in having a short scene giving a hint as to what a sequel may entail. Upon the credits rolling I got a very loud, very enthusiastic "I loved it!!!!" from my eight year old son who, as we were walking out, was asking if we can buy it the second it comes out on DVD and have a Ghostbusters marathon and reckons that anyone who doesn't like the film just because they're women, are stupid. My seven year old decided that she likes it just as much as the first films and loved that the women didn't need a guy to step in and save them. My five year old found some parts scary but that hasn't deterred her from wanting to watch it again and she loved seeing women fighting and winning.

My mum and I both agreed that we loved this film, and having watched the originals recently and being willing to look beyond it without rose tinted glasses on, this one is far better. Not everyone likes it, and it has very mixed reviews but I do insist that you don't read the online reviews as too many people have given it a bad rating, just because, so make your own opinion about it. I, meanwhile, cannot wait for it to be out on DVD and I really do hope that there's a sequel in the near future because we need more strong women kicking butt and winning.

Give it a chance and who knows, you may just have a fun time.

Score: 10.0
Product reviews for listing 6997: Hunt for the Wilderpeople -  Directed by Taika Waititi

An adaptation of classic Kiwi novel Wild Pork and Watercress, by Barry Crump, Hunt for the Wilderpeople tells the story of misfit kid Ricky Baker (Julian Dennison). When Rickyâ ™s foster aunt suddenly passes away, heâ ™s left alone with his grumpy uncle Hec (Sam Neill). The unlikely duo find themselves on the run in the vast New Zealand bush, evading child services and the law. They are forced to work together to survive and despite ... more...