« The Legend of Hercules review

ProdID: 5641 - Now You See Me
Directed by Louis Leterrier 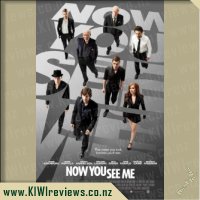 Now You See Me product reviews

Four magicians each answer a mysterious summons to an obscure address with secrets inside. A year later, they are the Four Horsemen, big time stage illusionists who climax their sold out Las Vegas show with a bank apparently robbed for real. This puts agents Dylan Rhodes of the FBI and Alma Dray of Interpol on the case to find out how they did it.

However, this mystery proves difficult to solve even with the insights of the professional illusion exposer, Thaddeus Bradley. What follows is a bizarre investigation where nothing is what it seems with illusions, dark secrets and hidden agendas galore as all involved are reminded of a great truth in this puzzle: the closer you look, the less you see.

Illusions, Tricks or Magic you decide. Watching this movie you are completely sucked into the magical world of magic. Its a thrilling watch as the four horsemen have the world believe in their abilities. I am usually pretty fast at guessing what is going to happen next but with this movie I just sat back and relaxed and I had my suspicions of who the fifth horsemen was but was way off the mark.

I actually need to rewatch this because it is so well done that you will not guess what is going to happen next. Yes it's easy to guess a couple of things but I had no idea who the fifth dude was and was really impressed when finally revealed - some extreme luck on their part mind you cause a lot of the time could of gone either way.

A stellar cast and a great script this is definitly a good movie to watch. I didn't like how Morgan Freeman kept revealing the 'how did they do it' secrets and would much prefered the mystery but I understand after watching the whole movie the reason behind it. I have to admit there was a point my husband and I was unsure whether one had survived and we were both second guessing ourselves - for a movie to do that it has to be rather spectatuclar.

Having seen the plot synopsis for this movie, I thought it might be a bit of a dud, so I wasn't too fussed about waiting for it to leave the big screen and make it's way down to the small one. Within 10 minutes of the movie starting, I regretted that decision, because it would have been AMAZING on the larger screen!

While the special effects are as you would expect, some of the extra bits - such as the way "the plan" was presented to the four magicians when they reached their mysterious rendezvous - were quite simply stunning. Were it only possible... I could throw away all my computer screens!

The performances were very well done, with casting being pretty much spot-on in my mind. Of particular note, the characters played by Morgan Freeman and Michael Caine - two actors I grew up watching - were perfection. These two great actors suited the roles so well. I was also impressed with how well Jesse Eisenberg - becoming quite typecast - fitted the role of annoying misogynist. Almost as though the role was written with him in mind.

Mark Ruffalo always makes me think of a young Vincent D'onofrio, but that is a good thing, because I am quite the fan of Vinny's works. I have yet to see him play a role I couldn't respect, and Mark is rapidly picking up that same track-record, having seen him in "54", "Eternal Sunshine of the Spotless Mind" and of course as the 'new' Dr Bruce Banner in the Avengers series of movies.

Overall, despite the culmination of the chase being a little predictable, the wrap-up at the end made so much sense of the entire shenanigans and the "big reveal" was still a good reveal. Everyone got what they were due, and no-one walked away untouched. I thoroughly enjoyed this movie, and have watched it many times since.

Score: 6.1
Product reviews for listing 3786: The Mummy : Tomb of the Dragon Emperor -  Directed by Rob Cohen

The blockbuster global Mummy franchise takes a spellbinding turn as the action shifts to Asia for the next chapter in the adventure series, The Mummy: Tomb of the Dragon Emperor.

Brendan Fraser returns as explorer Rick O'Connell to combat the resurrected Han Emperor in an epic that races from the catacombs of ancient China high into the frigid Himalayas. Rick is joined in this all-new adventure by son Alex, wife Evelyn and her ... more...