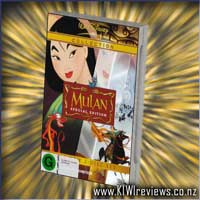 Disclosure StatementFULL DISCLOSURE: A number of units of this product have, at some time, been supplied to KIWIreviews by the company for the purposes of unbiased, independent reviews. No fee was accepted by KIWIreviews or the reviewers themselves - these are genuine, unpaid consumer reviews.
Available:
25th November 2004

Mulan is a young girl who wants to please and honor her family, but seems destined to fail. When she is sent to a matchmaker to win a good husband, her gawkiness and lack of grace lead to shame and rejection. These problems pale, however, when her aging father is summoned to join the Chinese army and repel the invading Huns.

Realizing that her father could never survive in battle, Mulan disguises herself as 'Ping' and takes his place. Her courage and ingenuity eventually distinguish her in the eyes of her commander, Captain Shang. With the help of her pint-sized dragon protector, Mushu, Mulan is key in turning back the Huns in battle.

When she is wounded, it is discovered that she is a woman, and Shang abandons her as a traitor. Left behind, Mulan sees the Hun army heading for the Imperial Palace and races there. When Mulan defeats Hun general Shan-Yu and saves the Emporer, she brings honor upon herself and her family and wins the heart of Captain Shang.

The story of a brave Chinese woman named Mulan has been told in China for nearly 2,000 years. Mulan is rumored to have been a real person.

Aimed at children, this is a 2000 year old tale that may have evolved from the tales of a real person.

With Eddie Murphy as the only familiar name in the entire voice-cast, you can SO easily pick out his character. Hint: Little Red.

My son and I sat entranced as the tale unfolded, as Mulan changed from tomboy to soldier in order to save her father from certain death defending China against the invading Hun Army.

Not too many 'musicals' in this, which was nice for me, but plenty of action, bright lights, and fireworks... all of which are just totally appealing to kids. This is another movie my son has added to his list of movies he'll happily watch over and over throughout the rainy days.

Overall, very nice indeed. It will be interesting to see my little man's reactions to the sequel. :)