Home > Categories > Movies > Comedy > The Gods Must Be Crazy 2 review

« The Gods Must Be Crazy review

The Boat That Rocked review 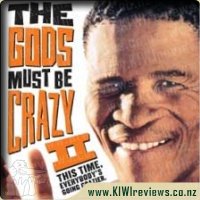 The Gods Must Be Crazy 2 product reviews

Xixo is back again. This time, his children accidentally stow away on a fast-moving poachers' truck, unable to get off, and Xixo sets out to rescue them. Along the way, he encounters a couple of soldiers trying to capture each other and a pilot and passenger of a small plane, who are each having a few problems of their own.

Xixo (N!xau), the lovable bushman from The Gods Must Be Crazy, returns in this sequel, which, if you enjoyed the first, is just as enjoyable the second time around. As with the first film, there are three different stories going on throughout the film which all managed to collide together by the end of the film.

This time around, Xixo's adventure kicks off when his two children inadvertently hitch a ride in a truck carrying water and supplies for two ivory poachers. Meanwhile, a visiting New Yorker (Lena Farugia) finds herself stuck in the outback with a local (Hans Strydom) who doesn't take kindly to dainty outsiders. Thirdly are two opposing soldiers who keep taking each other hostage, yup, each other hostage, time and time again.

It does take a little longer this time around to get into the film, but once you get into it it's a fun, heart warming film. There's not much in the way of character development or realistic plot developments up for grabs here, but that's not an issue as it isn't meant to be serious. While this doesn't make the movie very memorable it does give for some wonderful moments like fighting over a cup of water with a baboon, not something you see everyday I bet.

Some of the scenes feel a bit repetitive, but not in such a way that you need to turn the movie off, just perhaps wish it would fast forward through those bits. Once again dialogue is limited, but I don't see this as a problem as it just isn't necessary in this film.

Whilst The Gods Must Be Crazy 2 isn't as good as the first (and let's face it how many sequels ever are) this is still well worth the watch, which is why I own both films.

Score: 8.0
Product reviews for listing 123: Welcome to the Jungle (aka The Rundown) -  Directed by Peter Berg

A Los Angeles bounty hunter named Beck (The Rock) is instructed by his boss to travel to the Amazon jungle to retrieve his smart-mouthed, dimwitted, double-dealing son, Travis (Seann William Scott), who's been leading a life of adventure in Brazil.

But Travis is reluctant to leave, and when he tells Beck about a hidden golden idol, the ... more...