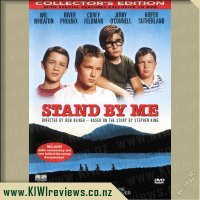 Stand By Me product reviews

In a small woodsy Oregon town, a group of friends- sensitive Gordie, tough-guy Chris, and flamboyant Teddy are in search of a missing teenager's body. Wanting to be heroes in each others' and their hometown's eyes, they set out on an unforgettable two-day trek that turns into an odyssey of self-discovery. When they encounter the town's knife-wielding hoods who are also after the body, the boys discover a strength they never knew they had.

I bought this for my mum quite a while ago, having heard my brother talk about how good a movie it was and my mum stating that she had never seen it, I thought it would be the kind of movie she would enjoy, I actually ended up watching it before she even did.

This follows four young lads, who are good friends, who hear a rumor that a young boy who has gone missing, is dead and they decide to go and look where they have heard that his body is. This leads them on a journey of self discovery as they learn a lot about themselves and it is the journey of a lifetime. There is a bit of interaction with other characters, like siblings and other such characters, but there the majority of this movie is about these four boys so that is all you really need to see.

This is a movie full of drama and angst and it is all really very well done, even though at the time I thought I wouldn't really enjoy it, in the end I actually found it to be a really good movie that had me hooked and wanting to know exactly what was going to happen with these young lads. I would highly recommend this movie to anyone who wants a well written, well acted film.

Cool Runnings - the outrageously funny comedy hit inspired by the true story of Jamaica's first Olympic bobsled team. They were four unlikely athletes with one impossible dream. Now, with the help of an ex-champion as their coach, four Jamaicans leave their sunny tropical island home and enter the chilly Winter Olympics to compete for the gold in a sport they know nothing about - bobsled racing!

Finding the courage in each other ... more...