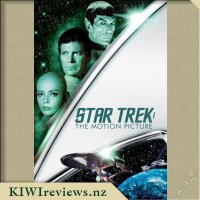 An alien phenomenon of unprecedented size and power is approaching Earth, destroying everything in its path. The only starship in range is the U.S.S. Enterprise--still in drydock after a major overhaul. As Captain Decker readies his ship and his crew to face this menace, the legendary Admiral James T. Kirk arrives with orders to take command of the Enterprise and intercept the intruder. But it has been three years since Kirk last commanded the Enterprise on its historic five year missionâ¦is he up to the task of saving the Earth?

When it comes to the world of Star Trek and its movies, this is one of the ones I have watched least, mostly because when I was younger I found it to be too long, tedious and boring. Having started my, who knows how many rewatches, of all the series with my kids, I decided to pop this on for them to watch but I did t expect them to really hang around. Imagine my surprise when Mr11 appeared to be completely hooked from the first moment and then Miss10, shortly after, settled down to watch it as well, and neither of them have left the room or played or stopped watching it at all.

The reunion of all the main cast feels a bit stilted, not quite a happy a reaction that one would expect but they still manage to throw in a few jibes at each other, "nor have you, doctor, as your continued predilection for irrelevancy demonstrates" - Spock to Bones. All my memories have been of not enjoying this and whilst I can't say that I now love it or can't wait to see it again, I have a new appreciation for it, from the slow pace to the overall ideas to what must of been a big budget for the sweeping visuals V'ger provides, which I really did find quite stunning at times. The uniforms look horrible, so I don't blame the cast for putting it in their contracts to have new uniforms for the next film (apparently they were very hard to get out of), I meant onesies, essentially, just don't seem practical as a uniform.

As the Enterprise flies off at warp, to explore the universe once more, my kids tell me that they loved the film and you know what, I do find that it is a pretty good film and it hasn't aged too badly at all.