« Doctor Who: The Reign of Terror review 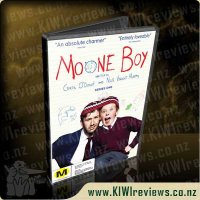 Every young genius has an imaginary friend. Unfortunately so do some simpletons. Introducing Martin Paul Kenny Dalglish Moone.

Moone Boy is a semi-autobiographical sitcom written, produced and co-starring Chris O'Dowd (Bridesmaids, The Sapphires, The IT Crowd) about a boy growing up in Ireland in the 1980s. O'Dowd plays Sean Murphy, the imaginary friend of 11-year-old Martin Moone (David Rawle), who also narrates his adventures. But while most boys would dream up a superhero sidekick, Martin's pal is a man in his mid-30s with the most common name in Ireland!

I'm a big fan of Chris O'Dowd. I first came to know his work through the IT Crowd where he plays an IT geek in the basement of a big corporate buildng. I really enjoyed the show and thought his comic timing was great. Since then his career seems to go from strength to strength, and he is popping up all over the place. So I was interested to see what this Moone Boy thing was all about.

Martin Moon is a kid at Primary school who isn't terribly bright. He is the youngest of four kids, and the only son. I guess you'd say the family portrayed in this sitcom is fairly typical of the 80s. Mum stays at home, but has a little side business and does a lot of volunteer work outside of the home. Dad has his own little business and is quite blue collar in his way. The sisters are all fairly nasty and much older than Martin too. So in his loneliness he has this imaginary friend.

In a lot of ways it's like what might have happened if Drop Dead Fred had become a series instead of just a movie. The imaginary friend acts as a narrator for Martin's life and helps him work through his problems. But because this is a comedy, this isn't always the best course of action. There is a lot of silliness, and "coming of age" stuff going on as Martin navigates the last days at his school and other family dramas.

I didn't find this laugh out loud funny, but I did feel engaged with the characters. They are all well written and likable in their own ways. I found myself interested to see what would happen next and watching three episodes in a sitting. I discovered that there is a series 2 for this, which is good as I definitely want to see the outcome of the various open storylines. Thanks Roadshow and KIWIreviews for selecting me to review this series.

Members of the crypto-zoological agency Monarch face off against a battery of god-sized monsters, including the mighty Godzilla, who collides with Mothra, Rodan, and his ultimate nemesis, the three-headed King Ghidorah. When these ancient super-species--thought to be mere myths--rise again, they all vie for supremacy, leaving humanity's very existence hanging in the balance.