« Under the Tuscan Sun review 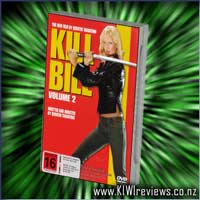 Disclosure StatementFULL DISCLOSURE: A number of units of this product have, at some time, been supplied to KIWIreviews by the company for the purposes of unbiased, independent reviews. No fee was accepted by KIWIreviews or the reviewers themselves - these are genuine, unpaid consumer reviews.
Available:
November 2004

However, something has thrown off her plans a bit. Her daughter (whom she was pregnant with as she was getting married) is still alive. What effect this will have on her quest for vengeance is unclear, but the question is, will The Bride actually succeeded in completing her ultimate goal...

Starting off with a "Previously on Kill Bill..." opening scene, we have the return of the Bride on her quest to kill Bill.

I found this film a lot more enjoyable than its predecessor. The constant cutting from past to present timelines reminded me of the constant switching between plot lines in Pulp Fiction, and I was glad to have more back story, as it proves to be the backbone of the franchise, despite its poor use; the Bride gets into a bad situation, cue the flashback that explains how she will escape the situation. It is all rather sloppily put together.

And yet I still enjoyed it more than the first film. The other characters still had no depth to them, and were incredibly one-dimensional, but the Bride and Bill did improve as characters. The plot is also a little thicker in this film, with necessary information coming into it, as opposed to filler. The fight scenes were again well done, but a little tiresome, and the ending was nothing short of predictable.

The journey of revenge for The Bride continues... as she travels from pitstop to pitstop to her kill ex-boss, ex-lover, Bill. And I am pretty sure she gets mentioned by name near the start...

Anyway, I wasn't quite as impressed with this one as vol 1, the scene-skipping was a little overboard with vol 2, making the storyline a little too juggled in places.

Overall, the sword scenes were again stunning, but a bit of the 'zing' was missing, since it was more of the same as the previous movie. Ahhh, but you'll just have to see for yourself what happens as she approaches the final confrontation with Bill.

Score: 8.3
Product reviews for listing 3281: I Don't Know How She Does It -  Directed by Douglas McGrath

Based on Allison Pearson's best-selling debut novel and written by Aline Brosh McKenna, this follows the day-to-day life of Kate Reddy, a successful investment banker who struggles to balance her high-powered career with an equally demanding role as a mum.

Kate Reedy devotes her days to a career with a Boston-based financial management firm. At night she goes home to her adoring, recently down-sized architect husband Richard and their ... more...