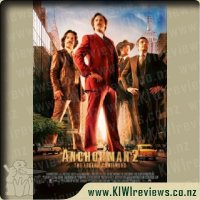 With the 70's behind him, San Diego's top rated newsman, Ron Burgundy, returns to the news desk. Also back for more are Ron's co-anchor and wife, Veronica Corningstone, weather man Brick Tamland, man on the street Brian Fantana and sports guy Champ Kind - All of whom won't make it easy to stay classy... while taking the nation's first 24-hour news channel by storm.

In all reality this film did well. To have a sequel released almost 10 years after its predecessor, it had me wondering what sort of direction that they would take it in. The original was, and forever will be a classic, and although there have been some raving reviews, it just wasn't quite up to standard for me.

Bravo to the actors, or their make-up artists, as they managed to pull of a sequel, and looked not a day older. With much of the same style of jokes, and slapstick humour, it was unfortunately too much of the same for me.

I was impressed with their choice of plot, however. Choosing to take on the introduction of 24 hours news, was an amazing choice; and it quite nicely showed the downfall of journalism to what it is today. I will say that most of the negative feelings that I have are most likely directed at the media itself, and not so much at this movie. I have just become so disillusioned with the influx of inane, insignificant, and often incorrect drivel, that gets portrayed constantly for every medium available.

This is pointed out often, and is such the way with American humour, they specifically point out every time that they are pointing it out. Perhaps that was my issue, the need to baby the viewers and tell us what it is that we are meant to be taking from the film.

Listen to me prattle on. This film, managed to do a rare thing. It created an enjoyable sequel. One that was very close to matching the first. That being said, if the original Anchorman film didn't exist, then this would still make a great stand-alone film. They should have just created one.

I loved the first Anchorman movie....have watched it many times with family and friends who make the mistake of telling me they haven't yet seen it! I can happily quote entire parts of the movie, so you can imagine my excitement when they announced a second movie was coming out!

The day it opened my sister and I rushed off to see it......and we weren't disappointed! All of our favourite lovable characters are brought back and are just as funny as ever. We catch up with them as Ron as finally hit the big but it soon takes a bad turn for him....and the laughs and craziness just go from there. As normal there are some real laugh out loud moments and some very memorable quotes. There is of course the moments that are just a bit 'over the top' but those are what make the movie!

Often sequels aren't as good or have the same 'feel' as the previous movie and just don't stand up the same....Anchorman 2 however is just as good as the first! So if your wanting a very funny, but certainly not at all serious, movie/dvd to watch I recommend Anchorman 1 and 2....you won't regret it!

I loved the first Anchorman it's one of the most watched movies in our house so I couldn't wait for the second to come out. I went along expecting it to be ok but not as good as the first boy was I wrong Anchorman 2 delivers just as many laughs as the first.

The same loveable characters from the first movie are reunited for the second. The movie begins with Ron at the top but he soon comes down with a crash. Not for long though when he is offered a spot on the first ever 24 hours news station. Ron agrees provided he can reunited his old team, Ron then sets out to track down his old news team. This journey in itself provides viewers with lots of laughs.

In true Anchorman style there is a mix of laugh out loud moments, so silly you can help but laugh moments and quirky one liners. Though Ron is the main focus of the movie the side story of Brick and his love interest provides some of the biggest laughs. Another big moment in the movie is all the cameos in the fight scene right near the end. I recommend Anchorman 2 to anyone who enjoyed the first as you won't be disappointed at all!

I was not expecting a lot from this movie, I figured it would have a lot of toilet humour and would be very tacky, boy was I wrong. Right for the beginning I was laughing away so much so by the end of the movies I was just about in tears. So funny, even the blind gags were awesome. It is so well done and the gags are fantastic and the end fighting scene blew me and my husband away. Cameos a plenty.

Ron Burgundy is fired and naturally can not cope with the failure. Eventually a job offer comes in that is so different that he jumps at the opportunity as long as his crew can also be hired. Through ground breaking ways of presenting the news his segment becomes a hit so much so it goes to Number one. After a tragic event takes his eye sight he learns to rely on his other censors so he can be on top again.

Everyone has got to see the fight scene. I am totally surprised more people are not talking about it. As it was happening you just kept thinking 'no way really' and then someone else would appear and your like 'wow' and then another person.... Has to be the best fight sequence ever - ok the fight actually sucked but the build up was terrific. Then there is his pet shark that he bottle feeds as a youngster until it swam away - have always wanted my own pet shark. Oh and the dinner with his new girlfriend, awkward but you are still chuckling away.

I don't think will be as good the second time but would love to see again. Really worth a watch and the movie theatre was packed. Everyone enjoyed themselves and would not mind a part 3.

After the disastrous food storm in the first film, Flint and his friends are forced to leave the town. Flint accepts the invitation from his idol Chester V to join The Live Corp Company, which has been tasked to clean the island, and where the best inventors in the world create technologies for the betterment of mankind. When Flint discovers that his machine still operates and now creates mutant food beasts like living pickles, hungry tacodiles, shrimpanzees and apple pie-thons, he and his friends must return to save the world.