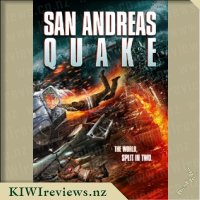 When a discredited L.A. Seismologist warns of an impending 12.7 earthquake, no one takes her seriously. Now on her own, she races desperately to get her family to safety before the earthquake breaks Los Angeles apart from the mainland. Well this is the second time I have been caught out by similar sounding films. In fact both times, I have been wanting to watch films featuring Dwayne "The Rock" Johnson, and both times, there has been another film with a very similar name that I have accidentally got instead. First I got caught out with 'The Legend of Hercules', when I wanted to see 'Hercules', and this time I ended up with 'Sand Andreas Quake' instead of 'San Andreas'. Do not make the same mistake as I did. DO NOT WATCH THIS MOVIE.

This film is firmly dug into B-Movie territory. The actors are noncommittal, inauthentic, and not overly likable. There is no time spent getting to know the protagonist, nor any of the other main characters in the film. It just goes straight into the "action". I use quotation marks, as the entire film seems to be horrifically computer generated. For example, the hippo in the picture provided. Yes, you heard me correctly. The hippo.

The movie was not believable. There was nothing about this film that I could really take in good faith. The CGI was obvious, and the timing was even worse. I wish there was a redeeming factor to this film, but I just feel cheated. I wish I had never seen it. I couldn't even enjoy the silliness of it (as I would do with most B-Movies). This was just terrible.

An army of malevolent little monsters take over a high-tech corporate skyscraper when a cute and intelligent exotic pet is exposed to water. The "Mogwai's" owner joins forces with the Trump-like head of the corporation to regain control.