Harry Potter: 5: The Order of the Phoenix review 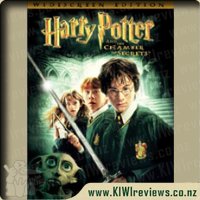 At the start of his second year of his amazing journey into the world of wizardry, cars fly, trees fight back and a mysterious elf comes to warn Harry Potter at the start of the second year. This year at Hogwarts, spiders talk, letters scold and Harry's own unsettling ability to speak to snakes turns his friends against him. From duelling clubs to rogue Bludgers, it's a year of adventure and danger when bloody writing on a wall announces: "The Chamber of Secrets has been opened". To save Hogwarts will require all of Harry, Ron and Hermione's magical abilities and courage in this spellbinding adaptation of J.K. Rowling's second book. Get ready to be amused and petrified as Harry Potter shows he's more than a wizard, he's a hero!

Back for a second year and it is already easy to see how much Ron, Hermione and Harry have grown.

This year everything seems to be set against Harry returning to Hogwarts and when Dobby, a house elf, turns up in his home confirming this, Harry is set up with yet another mystery at Hogwarts. There's duelling, a bludger on the loose, a voice in the dark that only Harry can hear and people getting hurt. My least favourite part of The Chamber of Secrets is when Harry and Ron deal with Aragog (a giant spider) and his offspring, spiders at the time were so not my thing, so seeing giant spiders on the big screen was NOT my cup of tea.

I really like how with the fact that most parts they stick true to the book (helps that Rowling was there to give her thoughts on it too), naturally there are always parts that get missed out as happens when you translate a book into a movie, I do wish though that they had managed to squeeze in another little part or two, or another ghost, I LOVE Peeves, he wasn't in the book much but had some great moments. The acting was good, the kids have come far since the first movie, it's easy to see.

Another fun Potter movie, worth a watch, naturally.

Get ready for the Daddy of all family comedies!

When it comes to raising their kids, Dusty (Mark Wahlberg) and Brad (Will Farrell) finally have this co-parenting thing down. That is, until Dusty's macho dad (Mel Gibson) and Brad's sweet-natured father (John Lithgow) come to town, throwing the whole family into complete chaos.

As old rivalries create new problems, Dusty and brad's partnership is put to the ultimate test in this 'hilarious and heartwarming' comedy that gives new meaning to the term 'blended family'.