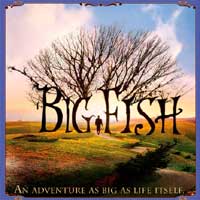 I LOVE this movie, I am a fan of any Tim Burton film, but this has always been in my top 5 favourite Burton films. I'm even watching it as I write up this review. A young man's father is on his deathbed and the son is desperate to find out if the stories that his dad told him his whole life had any fact to them at all or are they just fiction?

The sets and scenery in this are gorgeous, Spectre is a lovely looking town, the picture perfect white picket fence house to the thousands of daffodils set out when Edward Bloom is trying to win the heart of his true love... *sigh* Everything done in this film fit so perfectly and was just wonderful.

The one scene that always has me in tears when Edward is talking about being away, MIA for four months and his wife is only just starting to accept her loss when she sees his shadow, doesn't believe it is him, and then they reunite. *sob sob* It's a great story of a young man realising the 100% wasn't the most important thing to hear.

My quest at the moment is to find a copy of this to own on DVD.

I wanted to love this movie so much! Unfortunately being somewhat plebian in my movie preferences I found it difficult to follow. The jumping around between past and present confused my tiny brain, as did some of the actual events. Was it supposed to be real? Or not? I never did fully understand what was going on before it moved to the next big thing, and then it ended and I was still none the wiser.
Despite all that it was a gorgeous movie to watch. The sets and characters were amazing and complex and brightly woven, typical Tim Burton brilliance. Unfortunately however, it seems Burton or perhaps the author of the book was a much smarter person than I, as most of the story went completely over my head.

Not many movies move me to tears, but Big Fish had me sitting in the back row quietly crying at the story. As someone who can empathise with the son, this movie really made me think about my stuffed-up relationship with my father. He tries so hard to deal with his father's outragous stories, firmly believing them to be pure fabrications... until he finds the first thread that will lead him down a winding path to explore the tapestry that was his father's life.

While cleaning out the back shed (Home Turf to all males) he finds a stack of papers, deeds to the town of Spectre, one of the main locations from his fathers tales. SO he travels to Spectre and finds something, and someone, to open his eyes and heart to his father.

Big Fish is a great story, and it only fails in the See It Again factor because I don't think I could stand another dose of the heartache it caused me. But for those who DON'T have unresolved paternal issues, this would probably be a great one to take your loved ones to, as it will still give you the Warm Fuzzies in places.

Overall, it was another masterpiece, full of typical Tim Burton magic. If you liked Edwards Scissorhands, Sleepy Hollow and Beetlejuice, you'll see his signature imagery in many scenes. Well worth seeing.

Based on the book by the famous Dr. Seuss. Inside a snowflake exists the magical land of Whoville. In Whoville, live the Whos, an almost mutated sort of munchkinlike people. All the Whos love Christmas, yet just outside of their beloved Whoville lives the Grinch. The Grinch is a nasty creature that hates Christmas, and plots to steal it away from the Whos which he equally abhors. Yet a small child, Cindy Lou Who, decides to try befriend the Grinch.