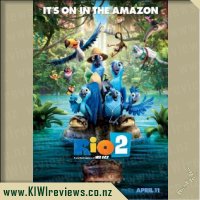 It's a jungle out there for Blu, Jewel and their three kids after they're hurtled from Rio de Janeiro to the wilds of the Amazon. As Blu tries to fit in, he goes beak-to-beak with the vengeful Nigel, and meets his father-in-law.

I was at the video shop and happened to see this as an ex-rental and given how much the kids had enjoyed the first one I figured that I might as well grab this one for them to and hope it was the right decision.

Well, first night with it and they popped it on to watch in bed and it wasn't too long at all before there was hysterical laughter emanating from the kids and it kept happening again and again, so it was easy enough to tell that they were loving it. Having a look at the cast I was happy to see that the same actors as the first movie were in Rio 2 as well, which helped it keep its entertainment value for me.

Happily enough this wasn't a rehash of the first movie, in this one Blu and Jewel along with their kids head to the Amazon to help Linda and Tulio find a flock of their fellow Blue Macaws. What happens takes Blu on one heck of a ride and once again far outside of Blu's comfort zone. There is lots of fun music to be had that really gets the feet bopping and the kids were having so much fun. They've watched this four times since we bought it and that was only a couple of days ago, so well worth the chance of buying it.

The kids have watched this before and keep going on and on about some of the funny parts so it was with interest that I watched it with them tonight. I was happy to see that some time had passed since the end of Rio and that Blu and Jewel had a family and they didn't look like baby birds.

It was interesting to see that Blu still had his "human comforts" and one of the funny things was watching them make pancakes and use the GPS and then showing on the map how they went around and around in circles. I did enjoy the music and hearing the kids laughing over and over again made it a movie I will be buying on DVD (if the little monsters learn to look after the DVDs they already have) for family movie nights.

The art work was great, good vibrant colours and fun pictures put together with great music means this movie is a must see. It is funny watching how the birds react to Blu and see him as nothing but a pet and how the humans react to the other birds.

I'm not sure if there is going to be any more Rio movies but if there are then I know we will be watching them.

I have come to the conclusion that you can not expect a lot from sequels. The first one usually blows you out of the water and the second one is either identical to the first one with a couple of subtle changes or its just so silly because it tries to be zanier than the first.

Well this movie was awesome!!!! Blu and the family go to the Amazon to help Linda and Tulio try and find more Blue Macaws which could protect the Amazon from loggers. Turns out there are thousands of these birds and the top na na is actually Jewel's father.

It was so different from the first one, a complete new story. It still had the regular cast including the naughty Nigel and was still up to his tricks and blames Blu for all of his misfortune. Pedro and Nico also come along as they are holding casting for a talent quest, so there is plenty of singing and performing. Actually Nigel's rendition of 'I will Survive' as got to be the best version I have ever heard.

It was colourful and bright and introduced you to new characters. I love Gabi who absolutely adores Nigel. So cute and ditsy and made for a lot of entertainment. George Lopez was back as well but he did not have a very big part which was a little upsetting as I really liked his character.

The movie is probably not best suited for small children, although our three year old watched it, it just did not hold her attention all the time. Where as our five year old said 'can we get it on DVD now'. We have since watched it twice (thru Sky Box Office) and I have enjoyed it both times. Just love the talent quest.