« Richard Hammond's Journey to the Centre of the Planet review

Hi-5 Some Kind of Wonderful review 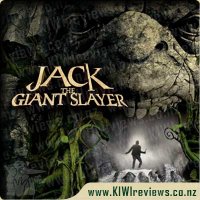 Disclosure StatementFULL DISCLOSURE: A number of units of this product have, at some time, been supplied to KIWIreviews by the company for the purposes of unbiased, independent reviews. No fee was accepted by KIWIreviews or the reviewers themselves - these are genuine, unpaid consumer reviews.
Available:
in cinemas from 21st March 2013

An ancient war is reignited when a young farmhand accidentally opens a gateway between our world and a fearsome race of giants.

Unleashed on the Earth for the first time in centuries, the giants strive to reclaim the land they once lost, forcing the young man, Jack, into the battle of his life to stop them. Fighting for a kingdom and its people, and the love of a brave princess, he comes face to face with the unstoppable warriors he thought only existed in legend... and gets the chance to become a legend himself.

This was a fun movie, if not all it could have been. Take everything you think you know about "Jack & the Beanstalk" and give it a twist, darken it down a few dozen notches, throw in a very talented voice cast and a somewhat underwhelming effort from Ewan McGregor who really seems to be little more than one of two 'token famous person' drawcards, and you have a movie that has a rating that would allow you to take your "tweenie" along with you, if they are OK with skull-bashing, decapitation-by-giant-mouth and "spontaneous 3rd-dimensionality loss" via giant's foot.

Keeping in mind that certain key elements of the classic fable are missing, and one element makes a token appearance directly and another only in passing reference... it still has the power to captivate to a degree. With some high degree of predictability, even with the original plot being almost entirely lost after the 3rd minute of the film, it was an entertaining romp through a parallel universe version of the tale.

With such a dark tone to it, and a lot of very warped characters - the giants were particularly ugly and misshapen compared to the stereotypical giants who are just enlarged versions of 'normal people' - and even a line "Have we fallen into legend already?" thrown in... this movie gave me definite vibes of something influenced by Guillermo del Toro - lots of deep dark concepts, a little surreal humour (the cook sings a delightful ditty almost akin to that sung by Gollum when he's fishing in The Hobbit), and some rather nasty implied-gore. So del Toro it left me wondering.

Overall, though I can not in all honesty say I was impressed by the movie, despite flawless special effects and CGI work, there was enough going for it that it would be well worth seeing at least once, especially if you like the current crop of CGI-driven fantasy movies spewing out of the studios. There's a wonderful twist at the end that keeps you wondering whether we will again hear the booming voices of giants coming to make another attempt to reclaim our lands. "Have we fallen into legend again?"

Pig and Runt are born on the same day, in the same hospital, moments apart. Twins in all but bloodline. Inseparable from birth, they are almost telepathic. They are one, needing no one else, inhabiting a delicate, insular and dangerous world where they make their own rules and have their own language. They are also partners in crime, with an appetite for recklessness, exploration and destruction.