Home > Categories > Movies > Fantasy > The Lord of the Rings : 1 : Fellowship of the Ring review

The Lord of the Rings : 2 : The Two Towers review

ProdID: 150 - The Lord of the Rings : 1 : Fellowship of the Ring
Directed by Peter Jackson 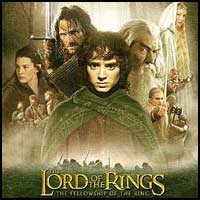 In ancient times the Rings of Power were crafted by the Elven-smiths, and Sauron, the Dark Lord, forged the One Ring, filling it with his own power so that he could rule all others.

But the One Ring was taken from him, and though he sought it throughout Middle-Earth still it remained lost to him. After many ages it fell, by chance, into the hands of the Hobbit, Bilbo Baggins.

On his eleventy-first birthday, Bilbo disappears, bequeathing to his young nephew, Frodo, the Ruling Ring, which starts him on a perilous quest: to journey across Middle-Earth, deep into the shadow of the Dark Lord, to destroy the Ring by casting it into the Cracks of Doom.

When I was younger, I think about nine years old, my mum was busy reading me the Lord of the Rings books, it took a little while (long enough that when we adopted a very young kitten we named her Pippin) but I loved the books, even reading them to myself when I was eleven and then again a couple of years later, so suffice to say, I was very excited when I heard that the books were being adapted into a movie series. The acting in this is amazing, during the first movie I had a crush on Legolas (though that ended when I finally paid attention to what he looked like outside of costume

), there isn't anyone in this movie that I can find fault with.

The special effects, wow oh wow, this was done amazingly well and it all just looks so brilliant. The scenery, well, what can I say, it is New Zealand after all... It is gorgeous and there isn't a moment that doesn't suit the film. The whole thing fitted in so well with what I could remember and it had me rushing to our book shelf and borrowing the books to re-read, it was a must. Everything in this movie was done so well, yes, it is a rather long movie, but that is necessary to fit everything that they can into the movie.

Having seen how the movie was made (yes, I was one of the many MANY extras) I know that a lot of effort went into getting the movie to feel as good as the book. Now that is almost an impossible task, and since I haven't actually read the books I don't know if Peter Jackson managed to make it happen or not.

But what I can say is that this movie blew my socks off! Totally! The special effects and camera angles really did allow one to easily suspend their disbelief and get totally involved in the film. I sat there mesmerised, lost in Middle Earth, as Frodo struggled to deal with his fate as The Ring Bearer, as the Elves, Men of Rohan and Gondor, and of course the Dwarves, all fought their need to destroy the One Ring over their desire to use it.

I was with Frodo as he and Sam, Merry and Pippin, and the Fellowship of the Ring travelled the rough and dangerous path towards Mordor and the fires of Mount Doom. I spent plenty of time softly chuckling to myself as I saw a particular orc fall over dead, or hack an elf in half, chase a hobbit or pull over a tree. (Yes, I was looking for my alter ego, and found myself in Middle Earth plenty of times.)

Overall, I would have to say that this was one of the VERY few movies I would gladly pay full price to go and see again. Though I don't think I would ever be as bad as some, who have seen it 20+ times. That's just obsessive, people!

A honeymooning bride (Rose Leslie) goes sleepwalking into the woods surrounding a secluded cabin. When she returns she looks the same, but something about her is frighteningly different.