Revenge of the Nerds 2: Nerds in Paradise review

ProdID: 5165 - Revenge of the Nerds
Directed by Jeff Kanew 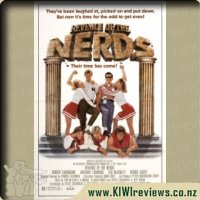 Revenge of the Nerds product reviews

When lovable nerds Gilbert and Lewis embark on their freshman year at Adams College, little do they realize the perils that await them. They're beset with taunting by the jocks of Alpha Beta fraternity, which only worsens when the jocks accidentally burn down their house and are forced toss the freshmen out of the freshmen dorm. To make matters more problematic, Lewis develops a crush on pretty Betty Childs, popular sorority sister and quarterback's girlfriend. Joined by the aptly named Booger and the violin-playing Pointdexter, the nerds soon realize they must form their own fraternity in self-defence. Soon the tables are turned as the nerds employ high-tech warfare against the jocks.... but can they really win and make a difference?

Revenge of the Nerds is bit of a travel back in time for us, the references, the acting, the music, it's fun.

Gilbert and Lewis are the stereotypical nerds for the 80's and yet this isn't done so badly as to be awful, it's skirts the funny line and succeeds well enough. They join college but when the jocks accidentally burn down their dorm (cause they're super dumb you know...) they kick the nerds out of their home and so they decide to fix up a local house and create their own fraternity. The then join the race to be the best fraternity resulting in some very funny moments.

Everything about this movie is a throwback to the 80's, the computers, the costumes, the attitudes etc. and it really is fun but utterly awful at times too with some of it's dated humour and relying on quite a bit of crass humour - putting a photo of a topless cheerleader under a pile of cream to raise money. This means that I don't fuss about watching the movie too often, we own this and I've only watched it twice in the last seven years.

This is a fun movie overall, it isn't anything too special but still worth a watch at least once if you lived in the 80's.

Four years after taking a bullet in the head at her own wedding, the bride (Thurman) emerges ... more...