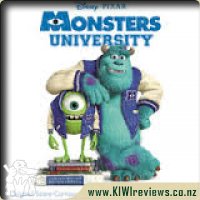 Ever since college-bound Mike Wazowski was a little monster, he has dreamed of becoming a Scarer-and he knows better than anyone that the best Scarers come from Monsters University (MU). But during his first semester at MU, Mike's plans are derailed when he crosses paths with hotshot James P. Sullivan, "Sulley", a natural-born Scarer. The pair's out-of-c.ontrol competitive spirit gets them both kicked out of the University's elite Scare Program. To make matters worse, they realize they will have to work together, along with an odd bunch of misfit monsters, if they ever hope to make things right.

Having watched Monsters Inc. when it first came out, hearing that Monsters University was due I was excited but a bit cautious due to how long after the first movie this was coming out and the fact that it was a prequel.

Here we meet Mike when he first decided he wanted to be a scarer and then jump forward to him joining Monsters University in the hopes of passing and become a professional scarer. Along the way he meets Randal and Sully, one who starts off as a friend and ends up an enemy and Sully who starts off as his foe and ends up his best friend. Along the way both learn what it really takes to be a scarer.

The storyline is fun and the ending wasn't what I expected so I was happy with that, it didn't have the perfect ending whichh was good, this was a story about friendship and hard work. The new characters were fun and it was nice to see the start of the friendship between our two main characters and how they grew as monsters.

This was a fun movie, whilst I didn't enjoy it as much as I thought that I would, I still had fun and the kids were all hooked on the movie.

It has been a fair few years now but I loved the original movie Monsters Inc so had to go and see this movie, despite the fact my daughter is now 11 she didn't mind going to see the movie and she enjoyed it too. She can not remember the first movie as it was so many years ago that she watched it and she was probably too young to remember it but after watching this she is all set to go to the DVD store and hire out Monsters Inc.

It was really cool going back to when Mike Wazowski was just a little kid and seeing where it all begun and then seeing him go to University and meeting Sulley. It is cool that they have created a movie that lets you know how their friendship began and how they got to be working at Monsters Inc. Disney Pixar did a great job of creating a movie that almost does feel like it came first even though it was made after the original movie so a big thumbs up in that regards.

The movie had all the hijinks of Mike and Sulley as they try to get into the scare program at Monsters University and it was really funny and had us laughing out loud in the movie theatre. I think it is just as good as the first movie and I will definitely buy it for my son when he is old enough to watch movies, absolutely loved this movie!

J discovers that there are secrets to the universe that K never told him - secrets ... more...