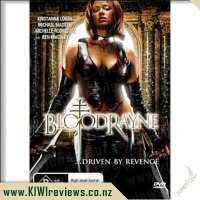 In 18th century Romania, Rayne (a girl with a human mother and vampire father) possesses superhuman strength but a soft side for humans. She decides to find her vampire father who is the powerful vampire Kagan. On her journey, she is befriended by two vampire hunters and learns that there are three Talisman organs - a heart, an eye, and a rib from her ancestor, Beliar - which Kagan covets, that will make him so powerful that he will throw the earth into darkness and vampires will rule forever.

I have owned one of the BloodRayne video games for the Playstation 2 console, but I was not very good at it, so the only knowledge that I had on the BloodRayne franchise prior to watching this film, was that it involved a woman with red hair, that dressed in red and black, and hunted vampires.

This film did agree with those points, but nonetheless, it was a rather pathetic excuse for a film. When I saw the names of the actors that were cast, I expected more from it; Michelle Rodriguez (Fast and Furious, franchise), Kristanna Loken (Terminator 3), Ben Kingsley (Ghandi, Schindler's List), Michael Madsen (Reservoir Dogs), and Matthew Davis (The Vampire Diaries).

The acting in this film is incredibly poor, with apparently very little money put towards the costumes, CGI, scripting, or continuity checks. The errors in continuity was most likely the part that made this film hardest to watch. After 30 minutes, I was well and truly sick of watching this film, and while Rodriguez did the best job of acting, the rest of the cast were laughable.

Meatloaf's role in the film was unnecessary, and seemed to be there purely to be able to add his name to the list of cast and add a scene that could hold naked women that again make no addition to the storyline at all. The constant switches between enemy, friend, and lover, were switching abruptly for no reason, and it created a mess to view. Make-up seemed to be the largest part of the budget, with every dismembered head, or sword through the torso, getting it's time on screen, and flashbacks just in case you missed it in the first occurrence.

How this film managed to get two sequels is beyond me. It was horrific. And I wish I didn't know that this film existed, so that I wouldn't have had an urge to watch it. If you like to pull apart inconsistencies withing movies, or wanted to see Kristanna Loken topless, then you may enjoy this film. But for the majority of viewers. I'd recommend giving this film (and most likely the sequels) a miss.