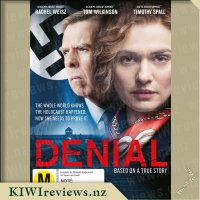 In 1993, Deborah Lipstadt publishes a book called "Denying the Holocaust", in which she refers to Irving as a denier. Soon after, he sues her for defamation under English law, where the burden of proof is on the accused. The whole world may know that the Holocaust happened, but now, Deborah and her legal team need to prove it.

Featuring a powerhouse performance from Rachel Weisz, Denial is the inspirational story of one woman's fight for historical truth, and a timely reminder that the truth itself can withstand even the most aggressive and persistent falsification. The timing of this release could not have been better timed, with the recent events unfolding in the United States; a.k.a the rise of neo-nazis into the public eye. The world needs a reminder of what occurs when people divide and rank the human species. A commonly paraphrased quote says "Those who cannot remember the past are doomed to repeat it", and with this generation being the last to be able to come face to face with a holocaust survivor, maintaining the validity of the events is integral.

Denial is a slow-moving film. It is both frustrating and an eye-opener. The prospect that someone denies the holocaust happened is laughable, but the reality of having to come up with incontrovertible proof of the matter is an entirely different matter. It causes you to question what you know. The reality is that as humans we are very easy to manipulate; we believe "reputable" sources. However, what counts as a reputable source is not so clearly defined anymore, and with the internet, misinformation is everywhere.

The film slowly builds towards the court case which is undoubtedly the most exciting part of the film, as we are looking to see our own knowledge tested; to be able to hear what evidence people have to deny what we believe, and to hear the evidence that proves them to be incorrect. Despite the rather morbid topic, the film is self affirming and in that regard, it almost comes across as a feel-good film, where the protagonist must overcome several obstacles that provide the antagonist an advantage.

With many of the court scenes repeated verbatim as they were in the actual court case, Denial provides a valid and accurate representation of the process, and was definitely a necessary move in a movie about misinformation. The casting was generally top notch; Rachel Weisz was my only concern, as her fame does make it harder to see her as her character. She is still the gorgeous actress I remember from the 'Mummy' franchise, just here she is given a frumpy hairstyle and a Boston accent; it was the only part that didn't feel authentic. That being said, as you can see in the photo, despite differences in appearance, the real Deborah Lipstadt clearly had no qualms with her casting.

The film is fueled by emotion, and gives a great presentation of the battle between emotion, beliefs, and objectivism. I would have loved longer, more in depth coverage of the court scenes, but with the run-time that the film has, again the balance was amicable.

Fences is the story of Troy Maxson (Denzel Washington), a mid-century Pittsburgh sanitation worker who once dreamed of a baseball career, but was too old when the major leagues began admitting black players. He tries to be a good ... more...