Home > Categories > Movies > Drama > Can You Ever Forgive Me? review

ProdID: 8288 - Can You Ever Forgive Me?
Directed by Marielle Heller 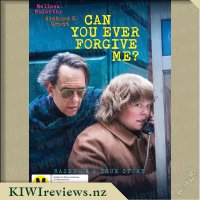 Can You Ever Forgive Me? product reviews

"Can You Ever Forgive Me?" is based on the true story of Lee Israel (Melissa McCarthy), the best-selling celebrity biographer - and cat lover - who made her living in the 1970s and 80s profiling the likes of Katharine Hepburn, Tallulah Bankhead, Estee Lauder, and Dorothy Kilgallen.

When Lee finds herself unable to get published because she has fallen out of step with the marketplace, she turns her art form to deception, abetted by her loyal friend Jack Hock (Richard E. Grant).

My attention was captured at the start of this movie by the camera tracking of the main character Lee Israel (Melissa McCarthy) as she progresses from her workplace to her home and then to a party. This establishes the time period (1980s), the place (New York), and Lee's own work background; but it also sets the scene for the social themes of the movie: poverty, failure, loneliness and rejection. The movie is based on Lee's own memoir, the legitimate product of a period in her life when she turned to crime. it also offers an insight into the reasons for her downfall, including her lack of charisma and her apparent inability to see the value in outward appearances.

Both Lee and her acquaintance, Jack Hock, are presented as physically unattractive people. They radiate squalor, both in their clothing and in their surroundings. Lee's apartment is dark, dirty and uncared for; there is cat excrement under her bed and dead flies on the surfaces. Jack is homeless, and when he does move in as Lee's flatmate his untidy ways only add to the misery of their surrounds. They are an unlikely pair - she is abrasive and he is proud - but somehow they manage to co-exist and eventually become partners in crime.

It is noteworthy that neither of them appears to have anyone else of significance in their lives. Both are loners, living life on the periphery of society while being totally wrapped up in their own agendas. Apart from her beloved cat, Lee shows no interest in personal relationships. A former girlfriend appears in one scene, just long enough to comment on how difficult Lee was to get on with before walking away again, and the art dealer who is interested in going on a date with Lee is quickly put in her place. As for Jack, he is portrayed as a world-weary butterfly who sleeps around, eventually (presumably) succumbing to AIDS.

Pithy dialogue is used to effect in this movie to highlight the two characters' motivations - there are plenty of succinct one-liners, including that used in the movie title. Some of these are original; others are quotes from various people whose letters have been forged by Lee and offered for sale. The funniest (in my opinion) was the sequence where Lee mentioned to Jack that she was writing Fanny Brice's biography, to which Jack responded, "Who's Fanny Brice?" Lee's riposte was "Are you sure you're a fag?"

No review would be complete without a mention of the music. Along with some contemporary tracks there were also others which predated the period in which the movie was set. Many of the tracks were slow "mood" songs, similar to the torch songs which might have been included in the seedy gay clubs frequented by Jack (and which were also visited sometimes by Lee). Artists like Peggy Lee, Patti Page and Dinah Washington were included, all evoking an era that is all but forgotten by today's film audiences. Even the end credits were accompanied by appropriate music as an old typewriter joins forces with a "modern" computer that features the acknowledgements in the left window while the right displays an update on what happened next, scrolling up to the accompaniment of keys being tapped as the "paper" moves up the typewriter carriage and a swing rendition of "Charade" followed by "Goodnight Ladies" then the livelier "Can Run But".

My one issue with this movie was with the editing. The story was fascinating, especially since it was based on fact; the acting is wonderful - I loved Richard E Grant's wickedly degenerate Jack; and the costumes are perfect, especially Lee's shirt which is invariably hanging out untidily beneath her coat. It is great to create atmosphere, especially when the intent is to engage the audience's emotions, but too many "mood" shots detract from the dramatic impact. This is a sad story on many levels: isolation, poverty, decline into the life of a criminal. But there are also some moments of high comedy, especially when Lee and Jack are pranking people who have annoyed them. I think there could have been more of these to balance what is essentially a tragedy - even though it does have a positive ending. But I do not for one moment regret watching this film. If only for the wonderful images of Manhattan. I was there myself when Lee Israel was selling her forgeries. Who knows, I might have even run into her!

Monty Python delivers the group's sharpest and smartest satire of both religion and Hollywood's epic films. Set in 33 A.D. Judea where the exasperated Romans try to impose order, it is a time of chaos and change with no shortage of messiahs and followers willing to believe in them. As its centre is Brian Cohen, born in Bethlehem in a stable next door, who, by a series of absurd circumstances is caught up in the new religion and ... more...