Fall; or, Dodge in Hell review 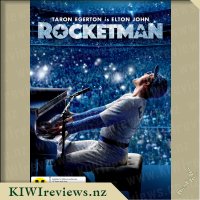 Rocketman is "a heart-racing, toe-tapping, all-glitter-cannons-blazing triumph on its own terms", set to Elton John's most beloved songs, as performed by star Taron Egerton. Discover how a shy, small-town boy becomes one of the most iconic figures in rock & roll - the international superstar Elton John. As he blazes a trail to the top, Elton creates a larger-than-life persona, while battling his own personal demons, and the challenges the world throws at him. Featuring an all-star cast, Rocketman is a one-of-a-kind, highly entertaining ride filled with show-stopping musical performances.

I have always been a fan of Elton John's music so was delighted to be able to review Rocketman. From the very start, I was singing along, much to the amusement of my three companions who decided the best thing to do was to join in as they could not stop me! This DVD is a biopic, focusing on the story of Elton John's early career, but it is also a musical. To further emphasise this, the DVD extras include a karaoke version of selected songs so that the viewers can sing along after watching the movie proper and not have to worry about forgetting the odd word.

Every one of the main characters delivered an authentic performance. Taron Egerton was so believable as Elton John that it was hard sometimes to remember that we were watching an actor, not the real Elton. His singing voice was quite different, but it worked: he may not have been Elton, but the songs still had the original impact. Jamie Bell, as Bernie Taupin, was a wonderful foil to Elton John's flamboyance; Bell is a fine actor and perfectly suited to the role. I was also impressed by the performance by Bryce Dallas Howard as Sheila, the mother from hell.

The opening scenes of the movie are cleverly crafted, leading from an initial therapy session into a dance sequence featuring Matthew Illesley as the young Reggie Dwight (who would eventually become known as Elton John). The boy Reggie and the adult Elton are dressed in vibrant colours, forming a contrast to the monochromatic world they are dancing through. This sets the pattern for the portrayal of an individual who was always going to be different, always flamboyant in relation to the world around him. Throughout the movie, this emphasis on colour and extravagance underlines this uniqueness; the toggles between the child Reggie and the adult Elton reinforce this. I like the way that the film shows his musical ability developing from a very young age; this, too, ensures continuity in his journey to stardom. Maestros do not just happen!

Crocodile Rock introduces another fantasy element to the story as Elton and then his audience float above the auditorium. The Pinball Wizard sequence then follows his reflection on the memory of his mother and his manager telling him to "act normal" and not dress so extravagantly - it develops into a commentary on being special in your own way and is delivered appropriately in full technicolour drag. Of course, this compulsion to be individual and rebel against expected norms is common to many artists, and is indeed part of the whole showmanship aspect.

The most disturbing sequence in the movie shows his suicide attempt; partly realistic and partly told through a dream sequence, it traces various memories of both successes and failures, referring back to his child self and his sense even then of not measuring up to the expectations of other people. The mood is one of utter disillusionment and despair, addressed only when his friends rescue him, homing in on him like a small army as if to prove that he actually does have a great number of people who believe in him - and that there is hope for his future after all. Elton John is an executive producer and his husband David Furnish is one of the producers, so clearly this episode was planned and executed in consultation with them to ensure its authenticity.

The therapy sessions which recur throughout form a reference point for each milestone in Elton's career. They represent reality as opposed to the loud, flamboyant scenes of his life as an artist - a life of immense creative imaginings, often tempered by alcohol and drug usage, and constant disappointment in his quest to be loved. His brief marriage to Renate Blauel (Celinde Schoenmaker) did not bring him the happiness and stability he had been seeking, and it was not until much later that he was finally able to find himself in his relationship with David Furnish who later became his husband.

The last therapy segment shows Elton confronting the key people in his life, imagining himself in dialogue with them as he frees himself from their influence in turn. It is a powerful demonstration about how resilience is built; disempowering those who would control you is the only way to move on. And finally, the end credits toggle between the actor and the real Elton John, with archive footage interspersed with the new material. It is confirmation that the movie is a true collaboration between Elton's history and its interpretation, sending out a strong signal that even the worst of times can only get better. Happy ever after? Let's hope so! In Elton John's own words, "I'm Still Standing!"

Annabel and Lucas are faced with the challenge of raising his young nieces that were left alone in the forest for 5 years.... but how alone were they?