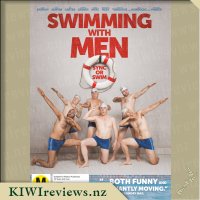 Inspired by the 2010 documentary, Men who Swim, this movie tells the story of Eric (Rob Brydon), an accountant in the throes of a mid-life crisis, who eventually finds new meaning to his life as part of an all-male, middle-aged amateur synchronised swimming team.

The members of the ramshackle squad slowly learn to reveal their inner lives as well as their paunches, and together they make a bid to compete at the Unofficial Male Synch-Swimming World Championships.

Swimming With Men is a delightful British comedy that tips its (swimming) cap at other films in the same vein, like The Full Monty and Calendar Girls.

Swimming With Men highlights one of the most appealing trends in British comedy: the representation of ordinary people who do not come across as young, super-beautiful or shapely. This trend has moved into the realm of the everyday where people are learning to cope with reaching their 40s complete with all the attendant characteristics like wrinkles, weight gain in unwelcome parts of the body, and hair loss. It is encouraging to watch "normal" characters interacting with one another just as they do in real life. I appreciated this facet of both The Full Monty and Calendar Girls, both of which featured middle-aged (and even elderly) characters stripping off for the camera with no apologies for their physical appearance - a far cry from the gratuitous sexual innuendo conveyed by the likes of Baywatch or (heaven help us) Fifty Shades of Grey where the emphasis is on physical ideals!

The cinematography in this movie impressed me - as a swimmer I am biased anyway, but I loved the underwater shots of limbs executing the mathematically precise sequences as they surfaced in synch, or the wonderful shots of Tom (Thomas Turgoose) holding his breath as he hid from the authorities at the bottom of the pool. As for the opening titles, they were a delight with their judicious use of bubbles to scroll the graphics and the swimmers in sequence. All of the underwater takes were carefully backlit so that the fine details were not lost amidst the chlorine and shadows that are always present in a pool.

Although this movie is far from confrontational, it has a certain charm insofar as the viewer wants the motley team to succeed no matter what, and despite the odd meltdowns by some of the characters. Only after I had watched to the end did I find out that it was inspired by the true story of a Swedish team who won the Unofficial Male Synch-Swimming World Championships back in 2009. Members of this original team were even involved with the coaching of the actors - a nice touch, and the playing out of the fictitious competition in the movie paid tribute to this. I don't intend to insert a spoiler and spell out what that result was, but I thought it was totally apt.

The various protagonists' personal lives are referred to throughout, but there is little character development. A lot of what is included is hinted at rather than explored in depth. Possibly, if the director had concentrated on one or two characters rather than trying to supply a fragmented backstory for every one, it might have worked better. Even Tom, whose character must have had the most fascinating background of all, was sorely underdeveloped. I would love to have explored more about his exploits in avoiding arrest.

My favourite character had to be the mild-mannered-turned-shrew Susan (Charlotte Riley) who was delightfully bossy in her role as trainer. In some way she became a group therapist, bullying and cajoling her "boys" into shape while encouraging them to overcome the personal issues that each of them was fighting. I almost expected at times to hear the catch phrase "Boys can do anything!". Rather than a comedy, the whole movie was an exploration of middle-aged angst and what could be done (thanks to Susan) to deal with it. It is a shame, however, that some of the opportunities for outright hilarity were missed. Despite this, there were some genuinely funny moments such as when the team were described as "the wheat intolerant Village People" because of their physical diversity, or when an exasperated Susan ordered them all to stop concentrating on holding their stomachs in and just embrace the bodies they had - sound advice!

Joining the six actors who formed the team were real life synchronised swimmers Ronan Daly (as New Guy) and Chris Jepson (as Silent Bob). They were not only drafted in as the seventh and eighth members, but also to assist with the training. The coach for the original Swedish team (Kata Bachry) was involved in upskilling the six main protagonists, and other members of that team were involved in the production as well. The result was convincing; the routines looked authentic, and probably some of the best moments in the film were those when a routine was shown being attempted and then tracked through to the end result.

The "black sheep" son (Scott Speedman) of a wealthy family meets a free-spirited but sheltered woman (Evan Rachel Wood). To convince his family that he's finally straightened out his life, he takes her home for his brothers wedding, where an improbable romance blooms as she impresses everyone with her genuine, simple charms.