« Five Children and It review 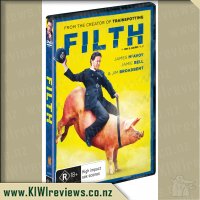 Desperately bored with his duties as a Detective Sergeant, Bruce (McAvoy) survives on a mixture of cocaine, alcohol and sexually abusive relationships. Determined to secure the lucrative promotion to Detective Inspector and reconcile with his estranged wife and daughter, Bruce begins concocting a plan to sabotage his colleagues, including Amanda Drummond (Poots). Bruce turns his nearest rivals against each other, one by one, and by increasingly creative means.

Assigned to lead the investigation surrounding the murder of a Japanese student, Bruce soon finds his life spiralling out of control. With increasingly frequent hallucinations featuring his psychiatrist, Dr.Rossi (Broadbent), Bruce stumbles, schemes and manipulates his way through the investigation, with his mild-mannered friend Bladesey (Eddie Marsan) and partner Ray Lennox (Bell) at his side.

Okay I read this one all wrong I heard comedy and thought this would actually be a movie I could have a good laugh to I didn't laugh once. I am not sure actually what the term 'black comedy' means but rest assured from now on I will probably do my best to avoid it. I have seen some bizarre films in my life time including trainspotting but this just takes the cake, I certainly wanted to say what on earth am I actually watching this for it went from strange to start to just all out bizarre through the middle and end.

I think the basic storyline of a somewhat corrupt detective going out of his way to sabotage others in order to get promotion was a good storyline and done differently I probably would of quite enjoyed it. However the nature of the hallucinations and the level of drugs and sexual content really wasn't my thing unfortunately. I wanted to follow the storyline but all the strangeness of him seeing pigs and screaming and stuff distracted away from any level of plot.

So unfortunately not a great score from me, I am sure there is a market out there for movies like this in the black comedy genre however they are not a style of movie I would go for again, give me a good laugh out loud comedy any day!

Alex's bone chilling gift reveals itself just as he embarks on a trip to Paris with his high school French class. In the plane's cabin, buckled-in and ready for take-off, Alex experiences his first powerful premonition. He sees the plane explode in a fiery blaze moments after leaving the ground. Sensing ... more...