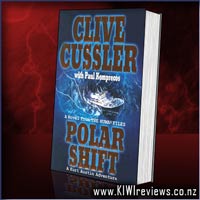 Polar Shift: it's the name for a phenomenon that may have occured many times in the past. At it's weakest, it disorients birds and animals and damages electrical equipment. At it's worst, it causes massive eruptions, earthquakes and climatic changes. At it's very worst, it would mean the obliteration of all living matter...

Sixty years ago an eccentric Hungarian genius discovered how to artificially trigger such a shift, but then his work disappeared... or so it was thought.

Kurt Austin and his NUMA Special Assignments team have faced dire situations before, but never have they encountered anything like this. This time, even they might be too late...

I have read more than a few 'pseudo-science' books such as The Paris Option, and seen many movies like The Day After Tomorrow that have 'end of the world' themes, and this book certainly ranks up there in the high-flyers. With some very interesting concepts, backed up with some very plausible-sounding science, I found it to be a really gripping tale.

With plenty of suspence, thrills and drama, it had some facinating characters and some astounding insights into our culture, both for the better and the worse. This book is just one of many that highlights how our societies, all of them, can be used by a small few to make serious trouble for all of us. It also highlights how our technology is running well ahead of our social maturity to use it wisely.

Overall, it was thrilling, and terrifying at the same time. It enthralled me with it's wonderful story, but scared me with it's detailed analysis of just how easily a small group of powerful individuals could stuff up the whole planet, all in the name of the great God Dollar. Clive Cussler, the man who also brought us Sahara is going to be an author I will be paying a lot more attention to.

The Guardians of the Galaxy are back! After saving the known universe, the team is humming along - Peter Quill (aka the legendary Star-Lord), Gamora, Drax, Rocket, and Groot are operating like a finely tuned machine,

But when a job for the Sovereign, a genetically perfect race of jerks, goes south (because obviously it would), the Guardians are back on the run and hopelessly outgunned. Their salvation could lie in the mystery ... more...