ProdID: 3018 - The Kingdom
Written by Clive Cussler and Grant Blackwood 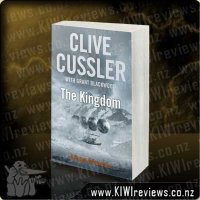 The husband-and-wife team of Sam and Remi Fargo are used to hunting for treasure, but they aren't used to hunting for people - until an investigator friend of theirs goes missing, and they promise to search for him. What they find, however, will be beyond anything they could have imagined.

On a journey that will take them to Tibet, Nepal, China, Venice, and Siberia, the Fargos will find themselves embroiled with black market fossils, an ancient Tibetan kingdom, a lost landmass in the North Sea, stone-age ostrich egg shards inscribed in a cryptic language, a pair of battles separated by thousands of miles and hundreds of years...and a skeleton that could just turn the history of human evolution on its head.

Gracie Grabbit and the Tiger
Rating: 7.8

This is the third instalment of the Fargo Adventures - the exciting antics of philanthropic couple Sam and Remi Fargo, head of a non-profit foundation aimed at solving historical mysteries and unearthing lost treasures... but acting more like James Bond crossed with Indiana Jones.

This tale has a slight twist to it... instead of a random encounter or innocent discovery triggering the adventure, it's the disappearance of a good friend of theirs... but all is not what it appears. As the saying goes, "If it looks too good to be true... it usually is." and in this case that is all too true, with betrayal, spying, espionage, slavery, murder, illegal relics trading, and even a connection to the Chinese Military thrown in for good measure... and yet, it all ties in fairly well, if you suspend your disbelief in a few key places.

The characters are, as always, well developed enough that they carry the depth to make them believable, yet not so deep as to be cluttering up the plot with irrelevant revelations that ultimately give no contribution to the story unfolding. You'll see your shallow "just here to pass on one little puzzle piece" characters, and your "I am here for a very important reasons, which you will soon discover" characters... and they all feel 'right' for their part... even the occassional passing comment from a backpacker ends up being far more relevant to the plot than at first thought.

Though the story takes a while... a long while, to get past the petty infighting, backstabbing and machinations of some of the key characters, and into the main storyline itself - the story of the legendary Theurang, which is a matter of historical record - when it does make it's appearance the plot rapidly becomes a lot more brisk, action packed and exciting, as you have not only the thrill of the unfolding discovery, but the action involved in staying one step ahead of the villains.

Overall, another worthy read, excellently poised to be a winter curl-up-in-bed-and-stay-warm time-passer. As a side note, in true Cussler style, Clive himself pulls off his almost signature "Stan Lee meets Alfred Hitchcock" move of making a cameo in the story, long enough to impart some key piece of information that otherwise may have been presented by another character... and though an accepted part of many modern stories, I do wish he would find a less cheesy way to pop in.

A culture of single-celled Archaeons, gathered from the deep sea, begins to rapidly multiply and infect the crew - with agonizing and ... more...