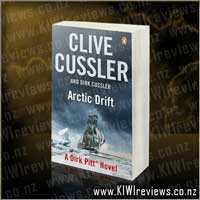 When Dirk Pitt of NUMA is almost blown to pieces in a lab explosion, he suspects foul play. The lab in question belongs to a scientist hoping to use a rare mineral to combat greenhouse gases - but who would want to destroy our one chance to save the planet?

However, there are those who will do anything to control such a valuable prize. Pitt's investigations take him to the Arctic in search of a clue to the origins of this precious mineral.

There, he and NUMA colleague Al Giordino, must battle against hostile elements and a corporate megalomaniac who is about to plunge the North American continent into war...

Having tracked down and read most of Cussler's 'Dirk Pitt' books ever since I stumbled across the movie Sahara, based on one of his books, it has always proven to be a real rollercoaster ride of a plot. This time, things were a little more tense...

You see, "Dirk Pitt" is now "Dirk Pitt Snr", Father of Summer and Dirk Pitt Jnr... he's getting on in years and the story clearly states he's a little less spry and vigorous than the early days... this is clearly angling the plot towards the eventual removal, or replacement, of Dirk Snr as a key character, in much the same way Admiral Sandecker is now only making the odd appearance in his new role in Washington D.C.

This story had all the same action, thrills, conspiracies and tension the previous titles had, but not all of it was performed by Dirk and his ever-loyal sidekick, Al Giordino. Some of the action was by the two kids as well... reckless, youthful, and a mixed pair in all senses of the phrase... so there could indeed be a new vanguard of talent around the not-too-distant corner... or the timely, but regrettable, end to this particular literary franchise... I am stumped, but I am seriously hoping to be proven wrong by many more Dirk Pitt titles to come.

As well as being somewhat thrilling, this story was, alas, a little predictable in places... the whole story revolves around a search for Ruthenium, a very rare metal that is incredibly difficult and expensive to extract... so it actually came as no surprise where Dirk and Al finally discover a veritable smorgasbord of the stuff, because in true Cussler style every apparently-unrelated event is really a key plot device, no matter how irrelevant it first appears. Then there's the 'Devil's Breath' element... but I won't go on about it.

Overall, despite being a little disappointing in places, and a lot worrying in terms of the future of the main character, I still very much enjoyed this book and the amazing journey's Dirk and Al once again take in their efforts to beat the bad guys while saving the world yet again. In this universe, humanity owes it's very existence to these two lads many times over. A worthy book, and worth reading by all Cussler fans. ALso interesting to see that Clive's son Dirk (Yes, that's right) is no co-authoring some of the tales, in much the same way the McCaffrey mother/son team have done. I do wonder if the story is reflecting the authors' intentions too?

Sophie and her friends, Marianne and Delphine, are surprised to win places on a school trip to Russia. But the trip does not go as expected. Abandoned on an express train heading out of St Petersburg, the girls are thrown out at a disused station, where they are rescued and taken to the beautiful but faded Volkonsky Winter Palace, as guests of the exotic Princess Anna Feodorovna Volkonskaya.

Guarded by white wolves, the princess is an ... more...