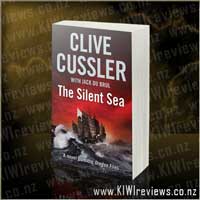 On December 7th 1941, four brothers exploring a shaft on a small island off the coast of Washington State make an extraordinary discovery, only to be interupted by news of Pearl Harbour.

In the present, Juan Cabrillo, chasing the remnants of a crashed satellite in the Argentine jungle, makes a shocking discovery of his own.

His search to untangle the mystery leads him first to that same small island and its secret, and then much further back, to an ancient Chinese expedition and a curse that seems to have survived for over five hundred years.

If Cabrillo's team is successful in its quest, the reward could be incalculable.

if not, the only reward is certain death.

This has to be one of the strangest, most twisted plots I have seen come from Cussler and Du Brul... and yet that is exactly what makes it one of the most thrilling reads from the series thus far.

This is the first time I have found a 'key' member of The Corporation team actually die in combat, and the cliffhanger is, to say the least, unexpected.

The story, as usual, starts of with a bunch of seemingly-unrelated events that soon prove to be key moments in a long, unfolding drama that ends up with Juan and the crew putting their lives on the line to do 'the right thing' - at the cost of money, team mates, and sometime even risking making things drastically worse. Also as usual, things MOSTLY pan out in the end, with the bad guys getting whupped good an' proppa... and the good guys getting away bruised and bloody, but still victorious... but this time with a pricetag some would consider almost too high to warrant the effort.

With a lot of travel, some surprise plays by seemingly-irrelevant characters, and some good old fashion "damned if we do, damned if we don't" dilemmas to deal with... the story doesn't go slack or quiet for very long at all. There is also some interesting background in the story which appears to be entirely fictional, but is so well written I had trouble not falling into it.

Overall, a little steep on the price, this is still a very new book... one that dedicated fans will find well worth the cost. Those who enjoy the franchise but at a lesser level may be willing to wait for the cheaper paperback version, but for me this was pretty good value for money. Awesome plot, great characters as usual, and some amazing twists that kept me guessing. Brilliant. Roll on the next one!

Count Sessine is about to die for the very last time...

Chief Scientist Gadfium is about to receive the mysterious message she has been waiting for from the Plain of Sliding Stones...

Bascule the Teller, in search of an ant, is about to enter the chaos of the Crypt...

...and everything is about to change. For this is the time of the Encroachment and, although the dimming sun still shines on the vast, towering ... more...