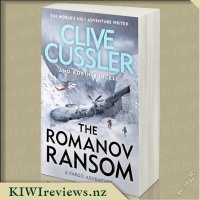 The discovery of a long-lost airliner... A modern-day kidnapping... And the return of the most terrifying evil the world has ever seen.

When a kidnapping captures the attention of treasure-hunting team Sam and Remi Fargo, they find themselves on the trail of the legendary Romanov Ransom - a Russian fortune stolen by the Nazis during World War II.

Hunting a neo-Nazi faction across Europe, North Africa and South America is their greatest quest yet. They must prevent the rise of a Fourth Reich, or witness the resurgence of the greatest evil of the modern world.

Cussler has a long legacy of thrilling, edge-of-your-seat stories, but I have to admit that the Fargo adventures are ones I find the most gripping, mainly because they seem a little more dynamic and have less of the "laugh in the face of danger macho heroics" that some of the other series contain. I suspect that it is, in part, because having a female protagonist in the mix adds an element of interplay between the protagonists that is more than simply 'forged in battle' camaraderie that the Oregon Files or NUMA Files tales carry in plentiful supply.

In this tale, they are roped into finding the lost treasure history has it Empress Maria Feodorovna, the last member of the Russian Royal family - the Romanovs (most famous for the young daughter who some claim escaped the slaughter, Anastasia) - paid to the Bolsheviks as a ransom for the safe return of her family... a family that was secretly murdered long before the ransom was sent. Of course, in true Cussler style, none of this is at all apparent to our protagonists at the start, this is information that becomes apparent to them as their adventure proceeds... as readers, the prologue gives us a scene-setting that provides vital context and impetus to the story, keeping us gripped by the pages as we try to urge the actors on towards the inevitable showdown.

I love how Cussler's works, though somewhat formulaic, never seem to get dull or overly predictable. Sure, once you have read a few dozen you can see where things are going in the big picture, but the details, the little twists that throw you off here and there, derailing your assumptions, keep the books engaging and in many cases enthralling... this series, and this title in particular, does that for me very well indeed.

The changing venues - from post-revolutionary Russia, through Germany, South America, Morocco, and back to modern Soviet territories - give you a sense of a larger conspiracy... a web of intrigue and subterfuge that spans not only continents but decades as well. Cussler dreams up BIG stories, in a big world, where overlap and co-operation between his major players across all the sagas are allowable, and often imperative to further the plot. This keeps his world consistent and adaptable, as well as dynamic and well-connected.

Overall, this was one of the better Fargo stories I have read, and in fact one of the best Cussler ones to date for me. I loved the added insight into the history of the Russian Revolution, small though it was, but also the aftermath of the break up of Nazi Germany and the diaspora of the war criminals. If you love Cussler's collaborations, then you'll not be disappointed by this tale. If you have yet to experience a Cussler novel, this is one you should get to after reading earlier titles in the Fargo series - not that this builds on too much prior knowledge, but it's so good you may find the earlier ones a little less appealing if you start here.

After being enrolled in the Song Festival, Geronimo Stilton's song, "Welcome to New Mouse City," goes to the top of the charts and makes Geronimo a star, but very few CDs are sold after the festival. Will Geronimo and his detective friend, Hercule Poirat, be able to solve the mystery?