Triad of Being : 1 : Being of the Field review

ProdID: 2391 - The Wrecker
Written by Clive Cussler and Justin Scott 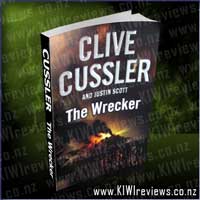 Bell quickly discovers that a mysterious saboteur haunts the hobo jungles of the West. Known as 'The Wrecker', he recruits accomplices from the down-and-outs to attack the railroad, killing them afterwards. The Wrecker travels the vast spaces of the American West as if he had wings, striking wherever he pleases, causing untold damage and loss of human life. Who is he and what does he want? Is he a striker? An anarchist? A criminal mastermind engineering some as-yet unexplained scheme?

Whoever he is, whatever his motives, The Wrecker knows how to create maximum havoc. Bell senses that he is far from done - indeed, it would seem that The Wrecker is building up to a grand act unlike anything committed before. If Bell doesn't stop him in time, the entire future of the country could be at risk.

I don't tend to read too many good thrillers... maybe I am just really picky, but most of them follow a fairly standard format when it comes to revealing the bad guy... you start with a 'grabber' - a short chapter that sets the scene, from there you have a long slog through the build up, throwing in events and a few red herrings to keep you reading, and then as you approach the final three or four chapters, you find out who the baddie is, why they are being bad, and just how they get slapped down for their often-herculean efforts.

This book, I gave it a chance purely on the basis that I have come to admire Cussler's works, and I am very, VERY glad I did... for I have finally come across something rather unique (to me at least). In this tale we actually find out who the bad guy is around half way... but that in no way stops the plot from remaining enthralling, in fact I felt it enhanced the tension because it allows us - as the omniscient reader - to watch the machinations of the baddie in action, and in the process gain insight into character as it gains depth, and also see how the protagonist not only catches up, but eventually starts to overtake the disruptive efforts of our erstwhile devil.

Yet, even with the mastermind revealed, there are plot twists that still manage to sneak up and pounce from out of blindside shadows, tension in the confrontations, false leads and blind fronts galore... "it's all so very exciting" as someone from the early 1900's might say. Oh, did I neglect to mention that the story is set in 1907-1908? Even so, you can forget the whole "cowboys and Indians, wild wild west" stuff... it's not here. This is gritty, rough, raw... and utterly mesmerising.

Overall, I loved it... though I have to admit the ending was a little of an anticlimax for me, as it appeared to be for the main character too though, so I guess it was a little fitting. I have obviously missed something wonderful by not reading the previous title, The Chase I think... an oversight I plan to rectify as soon as I can locate an affordable copy.

It is the 23rd century. Interstellar travel is possible, but colossally expensive, so humankind's efforts are focused on the only nearby Earth-like world. Isis is rich with plant and animal life. but every molecule of it is spectacularly toxic to humans. The whole planet is a permanent Hot Zone.

Zoe Fisher was born to explore Isis. Literally. She has been cloned and genetically engineered to face its terrors. But there are secrets implanted within her that not even she suspects - and the planet itself contains revelations that will change our understanding of life in the universe.