ProdID: 3640 - The Tombs
Written by Clive Cussler and Thomas Perry 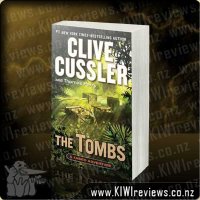 Disclosure StatementFULL DISCLOSURE: A number of units of this product have, at some time, been supplied to KIWIreviews by the company for the purposes of unbiased, independent reviews. No fee was accepted by KIWIreviews or the reviewers themselves - these are genuine, unpaid consumer reviews.
Available:
September 2012

Husband-and-wife team Sam and Remi Fargo are intrigued when an archaeologist friend requests their help excavating a top secret historical site. What they find will set them on a hunt for a prize greater than they could ever imagine. The clues point to the hidden tomb of Attila the Hun, the High King who was reportedly buried with a vast fortune of gold and jewels and plunder... a bounty that has never been found.

As they follow the trail through Hungary, Italy, France, Russia, and Kazakhstan - a trail that they discover leads them not to one tomb, but five - the Fargos will find themselves pitted against a thieving group of amateur treasure hunters, a cunning Russian businessman, and a ruthless Hungarian who claims direct descent from Attila himself... and will stop at nothing to claim the tombs' riches as his own.

Since my first encounter with Cussler's work, via the movie adaptation of "Sahara", I have enjoyed each of the various franchises fairly equally. You have the Dirk Pitt Adventures, the Kurt Austin Adventures, the Isaac Bell novels, the NUMA Files, the Oregon Files, and this one, the Fargos. A husband/wife tag-team that would put James Bond in an awkward position, the antics this couple get up to are pretty amazing, yet feel so very plausible - a hallmark of Cussler's works along with a Hitchcockesque cameo in each book, always there to impart some vital piece of information, guidance or assistance yet never really 'being there' at all.

Taking on a legend like Attila the Hun was a bold move for Cussler. It's one thing to write fiction based on fiction, but it's another thing to try and make fiction based on history - and make it read like fact - but once again Cussler makes magic in collaboration with Thomas Perry. Previous Fargo Adventures have been co-authored with Grant Blackwood so it was interesting to see the new feel Perry brought in. More drama, more intrigue and a lot more unravelling of cryptic history, where a total of 6 puzzles had to be investigated and solved before the adventure was complete. Only time will tell if this is Perry's influence, or just a necessary part of this particular plot.

Overall, another stunning addition to the Cussler Collective. Great characters that grow in depth and solidity as more of their history is revealed and new bonds forged while old bonds are renewed. It was great to see the team bringing a major character into their inner circle for the duration and sake of this adventure, but also seeing new faces popping up that may, I feel, return in later stories based on their interaction with the Fargos. If you are looking for something that will not only entertain but also provoke thought, this is a great title to consider. Not my favourite of all Cussler titles, but certainly my favourite Fargo adventure thus far.

When it comes to revenge, love is a dangerous complication.With a fierce rivalry raging between two warring families, falling in love is the deadliest thing Sophie could do. An epic debut set outside modern-day Chicago.