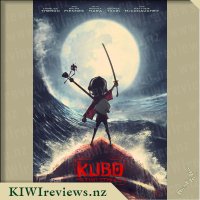 Kubo lives a quiet, normal life in a small shore side village until a spirit from the past turns his life upside down by re-igniting an age-old vendetta. This causes all sorts of havoc as gods and monsters chase Kubo who, in order to survive, must locate a magical suit of armour once worn by his late father, a legendary Samurai warrior.

I was more interested in Kubo than my three kids were, but given the low prices at our local cinema, I knew this would still be worth going to, and my kids were all happy that I had taken them.

I do have two gripes about this film, the first is that George Takei ends up with his name on the posters, but in the film he barely gets a look in, all I remember his character really saying is his trademark "oh my"... The other point being, that yet again, that whilst the characters are all Asian in origin, the majority of the cast are not... But now that I have my gripes aside, I can talk about what we did like (and what spooked the kids out). Kubo sets off on a journey, fleeing his aunts, who were rather spooky and had us all on edge.

The imagery in the film is gorgeous, there is a scene where Kubo builds a boat out of leaves, and it is gorgeous, and the moments with the animated origami are lovely and really well done. They have a stop motion giant skeleton which I thought was fantastic and if you hang around during the credits they show you just how big it really is, and here's a hint, it's frikkin huge! The ending still managed to surprise me, there will be a reveal, and while I guessed half of it, I hadn't guessed the other half. If you want a 'everything ends happily', don't expect it here, however don't let that stop you as this is so beautifully done.

This was a fab film and I would happily watch it again.

Score: 8.0
Product reviews for listing 625: War of the Worlds
Directed by Steven Spielberg

Ray Ferrier is a working class man living in New Jersey. He's estranged from his family, his life isn't in order, and he's too caught up with himself. But the unthinkable and, ultimately, the unexpected happens to him in an extraordinary sense. His small town life is shaken violently by the arrival of destructive intruders: Aliens which have come en masse to destroy Earth.

As they plow through the country in a wave of mass destruction ... more...