ProdID: 3786 - The Mummy : Tomb of the Dragon Emperor
Directed by Rob Cohen 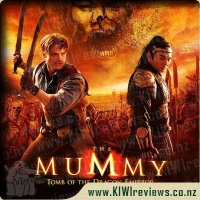 The Mummy : Tomb of the Dragon Emperor product reviews

The blockbuster global Mummy franchise takes a spellbinding turn as the action shifts to Asia for the next chapter in the adventure series, The Mummy: Tomb of the Dragon Emperor.

Brendan Fraser returns as explorer Rick O'Connell to combat the resurrected Han Emperor in an epic that races from the catacombs of ancient China high into the frigid Himalayas. Rick is joined in this all-new adventure by son Alex, wife Evelyn and her brother, Jonathan. And this time, the O'Connells must stop a mummy awoken from a 2,000-year-old curse who threatens to plunge the world into his merciless, unending service.

Doomed by a double-crossing sorceress to spend eternity in suspended animation, China's ruthless Dragon Emperor and his 10,000 warriors have laid forgotten for eons, entombed in clay as a vast, silent terracotta army. But when dashing adventurer Alex O'Connell is tricked into awakening the ruler from eternal slumber, the reckless young archaeologist must seek the help of the only people who know more than he does about taking down the undead: his parents.

As the monarch roars back to life, our heroes find his quest for world domination has only intensified over the millennia. Striding the Far East with unimaginable supernatural powers, the Emperor Mummy will rouse his legion as an unstoppable, otherworldy force... unless the O'Connells can stop him first.

After the second Mummy film, I decided it would be best to watch the trailer for the third; lo-and-behold my fears were founded. CGI, CGI, CGI, computer generated things everywhere. This final installment involves a new villain; but otherwise the same characters.

The plot becomes exceptionally complex and convoluted in this second sequel. The history and back story of this film is exceptional, and I would have loved to have been able to see this back story in its own film, rather than have it jammed in every nook and cranny within this film.

It introduces a new character, known as Lin, who turns out to be just as impractically convoluted as the plot. As the film goes on, I find myself getting bored; the use of magic has become too prevalent, with little known restrictions. It gets to the point that no one truly stands a chance to win, and that makes it all the less believable if they were to do so.

A symbolic passing of the torch, from Jack to his son, Alex, this movie is too far-fetched, and I end up feeling bad for Jet Li. You can see he did everything within his power to make this film a great one. But sadly, it was out of his hands. The story was just too much for one movie; it accelerated far too quickly.

I was very excited when I heard that there would be a third film in the Mummy franchise, yet I began to feel a little concerned when I read that a) it wasn't going to be set in Egypt any more but in China instead, and b) that while Evelyn was still going to be in the main characters she would no longer be played by Rachel Weiss.

The special effects in this film are everything tat you have come to expect from The Mummy movies. From yetis in the top of the mountains to an army of skeleton soldiers. There's some great scenery and imagery in this film.

All the hype leading up to this film did leave me disappointed. Considering that the 'fight of the century between two great kung-fu actors' was almost no fight at all had me feeling let down. The casting in this film wasn't as great, I didn't like the replacement for Weisz, and the man playing the now grown-up Alex was too cocky.

I own this movie, but simply to own the complete series.

A young woman is entranced by an Aerialist. When they fall into the dreamlike world of Cirque du Soleil and are separated, they travel through the different tent worlds trying to find each other.