« Kubo and the Two Strings review 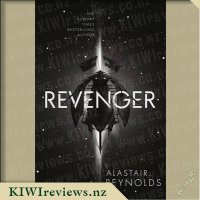 The galaxy has seen great empires rise and fall. Planets have shattered and been remade. Amongst the ruins of alien civilisations, building our own from the rubble, humanity still thrives. And there are vast fortunes to be made, if you know where to find them.

Captain Rackamore and his crew do. It's their business to find the tiny, enigmatic worlds which have been hidden away, booby-trapped, surrounded with layers of protection - and to crack them open for the ancient relics and barely-remembered technologies inside. But while they ply their risky trade with integrity, not everyone is so scrupulous.

Adrana and Fura Ness are the newest members of Rackamore's crew, signed on to save their family from bankruptcy. Only Rackamore has enemies, and there might be more waiting for them in space than adventure and fortune: the fabled and feared Bosa Sennen in particular.

Revenger is a science fiction adventure story set in the rubble of our solar system in the dark, distant future - a tale of space pirates, buried treasure and phantom weapons, of unspeakable hazards and single-minded heroism... and of vengeance.

When it comes to sci-fi, I like mine well-hardened, gritty, dark and somewhat alien or outrageously uber-tech... which means I usually appreciate Reynold's works a lot more than I did this tale. Set in the far future, when the universe has pretty much had it this story tells of humanity as it struggles to find raw materials to survive. The solar system as we know it has been utterly reworked from the clumps of hard debris we know today into a panoply of habitats, micro-worlds, space stations, bodged-together accumulations and aggreagates, and other sundries. The human sphere has shrunk to an area small enough that ships travel only on ion drives and solar sails, and that space is also shared by a number of alien races.

Within this remaining bubble of life drifts innumerable chunks of history, carefully wrapped in energy shielding that makes them, effectively, time-capsules with erratic but somewhat-predictable patches when they open themselves up for brief periods lasting anywhere between hours to a couple of weeks. Known as "Baubles" to the locals, they are the remains of worlds inhabited in millennia past by human empires of almost unremembered technologies and wealth.

The big "plot twist" for this tale is not the most obvious one... it's a strange one to be sure, and oddly enough it isn't really dealt with in any great depth, instead the story seems far more focussed on the big red herring which was incredibly predictable for me, and I assume for any well-read sci-fi or crime thriller reader for it has strong ties to both genres. That's not to say it was a bad one, by any means... just not as impactful as one could have hoped for from such an august author.

Character development is solid, with all of the key players well defined, secondary characters were also solid with coherent back-stories to give them depth. Tertiary characters, such as the Ness sisters' father and their butler-cum-babysitter robot, were covered well enough that they didn't feel flimsy but I felt they were given an implied importance beyond the scope of their eventual roles.

To say I was surprised and a little disappointed wouldn't be too far from the truth, because I am used to far more cutting stories from this author, however the overall softness of the plot as a whole, and the rougher scenes in particular, opened this book to a younger audience I feel - the tense moments weren't that scary, and so this tale became something that would appeal to early-teens easily - something Reynold's stronger stories can't as easily lay claim to.

Overall, I thought this story still held a lot of merit, but die-hard readers of Reynold's other works may find themselves having to re-read this one a couple of times to uncover the deeper layers of plot, if such exist. For me, this was an enjoyable way to pass many hours in between other tasks, but it wasn't one I had trouble putting down to return to the real world. Good, but not as gripping as it could have been. Think Jack Sparrow at the helm of the Serenity, and you're getting there.

The bestselling guide to markets in all areas of the media, completely revised and updated, and this year in its 100th EDITION, with a foreword by Ian Rankin.

New articles in this edition include:

• Notes from a successful writer of historical fiction - Bernard ... more...