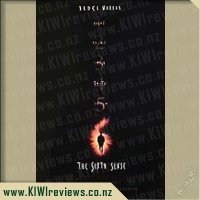 Malcom Crowe is a child psychologist who receives an award on the same night that he is visited by a very unhappy ex-patient. After this encounter, Crowe takes on the task of curing a young boy with the same ills as the ex-patient. This boy "sees dead people". Crowe spends a lot of time with the boy (Cole) much to the dismay of his wife. Cole's mom is at her wit's end with what to do about her son's increasing problems. Crowe is the boy's only hope.

This is one of those movies that I have see at least half a dozen times, and enjoyed it each time, and since it was being played on TV over the holidays I decided to record it, this viewing marked only the second time I had watched the entire film right from the start.

Let me tell you that those first few minutes are rather key, so it is best to watch it from start to finish. :P I ended up starting to watch The Sixth Sense at 11:30pm thinking that I could easily turn the TV off and finish it another day, but once into it I simply couldn't "put it down". Cole is a young boy, with a solo mum, who is a loner at school, picked on and bullied by all his classmates and so he's even more withdrawn before you even throw in his ability to see the dead.

Osment is brilliant in his role as Cole and is fully believable as this haunted young child who wants nothing more that to be left along. Willis does well in his role of psychologist, trying to help this young boy and mend the holes in his marriage. What starts off as a drama movie steadily it becomes more and more spooky and there are some moments, that even though I knew they were coming, still had me jump a couple of times.

The only thing I would change about this movie would be when I watch it, ie. not right before bed so it ends up giving me strange dreams.

In this enchanting film adaptation of J.K. Rowling's delightful best seller, Harry Potter learns on his 11th birthday that he is the orphaned son of two powerful wizards and possesses magical powers of his own. At Hogwarts School of Witchcraft and Wizardry, Harry embarks on the adventure of a lifetime. He learns the high-flying sport Quidditch and plays a thrilling game with living chess pieces on his way to face a Dark Wizard bent on destroying him. For the most extraordinary adventure, see you on Platform 9 3/4!