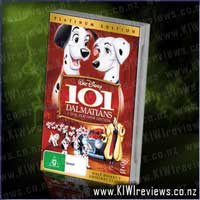 A charming London neighbourhood is home to Roger and Anita, whose beloved Dalmatians, Pongo and Perdita, have become the proud parents of 15 puppies. But when Cruella and her bumbling henchmen, Horace and Jasper, unexpectedly appear, the pups soon disappear - along with every other Dalmatian puppy in town! Now Pongo and Perdita must rally their animal friends and use the power of the 'Twilight Bark' to find Cruella's secret hideaway and free the puppies. Featuring the unforgettable toe-tapping song "Cruella De Vil, 101 DALMATIANS is one of the most cherished and sought after Disney classics of all time - and among the last films to bear the personal touch of Walt Disney.

101 Dalmations has been around for as long as I can remember, and I could not wait to purchase a copy on DVD for my daughter who is puppy / dog crazy. I am a huge fan of all the extra features that are now on DVDs, from deleted scenes, to trivia, games and more, so I really enjoyed this part of the DVD.

Animated movies are a fun way to portray animals or material objects that can not generally be acted in a movie. With 101 Dalmations you kind of expect this cutesy movie about, well 101 Dalmations, but the adults in the story kind of detract from that. There is Roger and Anita, who own the dogs which have 15 puppies. There's Cruella DeVille wants top he puppies, and is evil. To children she is terrifying and scary, and some younger children may not enjoy the moments she is on the screen. And there is Cruellas hench men who still the puppies. Much of the movie is portrayed around these three groups and not the actual puppies / dogs.

But all this aside, the movie is still an enjoyable one. My daughter enjoyed watching it, and was totally transfixed by the puppies and their adventure getting home. The ending is a happy one, which she was super pleased about. Still a fantastic movie, and one of my favorite books too.

I love the concept of this movie. Especially as a young farmer girl with a passion for dogs. I used to watch it over and over again. I could say most of the words before they happened.

I was terrified of Cruella deVil, I admire the bravery of Roger, Anita and Nanny standing up to her and protecting the dogs and puppies. The movie did have some scary bits and as a mother have only just let my son watch the movie at nearly 5 years old so I can explain some of the bits to him. He really enjoyed the movie and has watched it a couple of times since then.

It is a fairly expensive movie but is wonderful for teaching about standing up for the things you love and working together. I think every small child thinks it would be cool to own 101 small spotty pups, But mum doesn't. I would recommend the movie to parents with school aged children, not pre-school children.

They wouldn't make movies like these nowadays as it would be seen to be incorrect in a children's movie to have a character smoking cigarettes or drinking wine from a bottle. Their is a bit of language like fool and idiot and imbecile in it as well and some light violence so that may be why it is rated as a G. In my opinion there is nothing in it that is harmful to children though although younger children may find the character of Cruella De Ville a little scary as the song goes "If she doesn't scare you, no evil thing will".

In the story the evil cruella has her henchmen steal 101 dalmations to make herself a fur coat out of their skin. Of the dogs stolen where two adult dalmations Pongo and Perditas puppies, so the two dogs set out to find their own puppies and then rescue all the others too and take them home to their own masters. A great movie with funny moments and really cute animated animals.

As with Aristocats, this is one of the great classics that will continue to be loved for many more years, and thanks to modern technology, still plays with the same clear, crisp quality I remember from back when I was a kid.
Being a double disc set, there were more bonus features with 101 Dalmatians than with Aristocats, but some of them were quite similar- for example, the virtual adopt a puppy game (although I found this version is slightly better than the kitten one), and the "fun with language game" (which I found rather boring, but young kids may enjoy it more). But there were also a couple of different bits I rather enjoyed- like the "Cruella De Vil" music video by Selena Gomez (didn't think much of the music video itself, but I definitely liked the new version of the song), the pop-up trivia facts, and the "puppy profiler" game.
If you're stuck inside on a wet afternoon, then this is a great movie to keep the kids entertained, especially when they'll probably quite happily spend ages playing with all the extras as well. Another MUST for the kids' collection, and definitely a good contender for your own if you enjoy the occasional kids' movie, or just enjoy Walt Disney!!

It's 1999 and teenager (Tobey Maguire) is a dedicated fan of PLEASANTVILLE, an old TV show set in a utopian small town USA, circa 1957, where things are definitely simpler. A very different place to today with cable television, divorce and teen sex. Big fan David may be, but he didn't plan to actually be in PLEASANTVILLE!!

Incredibly, David and his sister Jennifer (Reese Witherspoon) are transported into a black and white ... more...