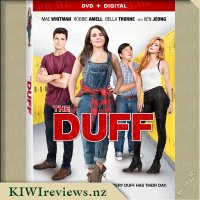 Disclosure StatementFULL DISCLOSURE: A number of units of this product have, at some time, been supplied to KIWIreviews by the company for the purposes of unbiased, independent reviews. No fee was accepted by KIWIreviews or the reviewers themselves - these are genuine, unpaid consumer reviews.
Available:
12 August 2015

Frumpy high-school senior Bianca (Mae Whitman) has a rude awakening when she learns that her classmates secretly know her as the DUFF -- designated ugly fat friend -- to her prettier and more popular pals. Desperate to reinvent herself, Bianca enlists the aid of Wesley (Robbie Amell), a charming jock. In order to save her senior year from becoming a complete disaster, Bianca must find the confidence to overthrow a judgmental student (Bella Thorne) and revolutionize the school's social order.

Every once in a while you watch a movie and expect it to be one way and instead it completly blows you out of the water and goes another way. I expected a no brainer romance but I enjoyed the twists and turns this movie had. Yes it is extremely predictable who the 'lovers' would eventually be but I really enjoyed the journey to get to that point. It also made you realise how much social media has taken over our lives and how easily it can take a turn for the worst. I am amazed at how Bianca handled it as I would be a complete wreck it if had been me. However, I am not sure how it got that comedy rating as no way is it funny.

The Duff is basically everyone. At some point everyone feels insecure compared to their friends. But, in Biancas case it is brought to her attention that she is the frumpy ugly friend who is only around to make her friends look better so she basically decides to change. Asking her annoying and very cute neighbour to help her in exchange she would help him pass science. Sounds like a lot of teen movies I know but the difference was the acting was great, the script worked and the lead characters gelled together beautifully and they were convincing.

What was not so convincing though was how Bianca had the two besties and how they could put up with her negativity all the time considering they where so upbeat. They appeared to be the complete opposites so it kinda wrecked a part of the movie for me.

It is not a complicated story at all but an enjoyable one and an insight into school life now with phones and social ranks. To go from being invisible to being one of the most despised students would be extremely difficult especially when you have no one to back you up. I liked how it got flipped around and I especially loved the end, its so nice to see a romantic movie that I could quite easily watch again. A lovely movie to give you that warm snuggly feeling. When I watched this film, I couldn't help but draw some comparisons to 'Not Another Teen Movie'. It ticked every single box of what you expect from every single teen comedy film created...throughout all time. That being said, there were a lot of aspects of the film that I enjoyed. It did seem to be a slightly more matured version of a teen film, clearly aimed more at the female audience, as it followed the "average" girl, rather than a group of males. There was no unnecessary nudity (well, there was no real nudity at all), instead we get to see the consequences of categorising people, primarily the revelation that you are the DUFF; designated ugly fat friend. While a term that I was previously unaware of, I was certainly able to empathise with a person who people use to get closer to their friends. A stepping stone.

As with most teen movies that involve an "average" girl, you get the makeover at the end that wows everyone else, but it isn't what you expect. And this film is better because of it. You actually have well written characters. They aren't just one dimensional, based on their physical attributes. You have insecure jocks, and attractive popular girls who are loyal to their friends. In fact, it was the protagonist that I liked the least. And that takes talent to make the character I see the most, a flawed character, that has to actually develop and grow into a better character.

I questioned many things in this film. Why was this in the film? What is the point of that? How is that a believable thing to have happen? But in the end it all came together, and it all made a lot more sense. I think I learned a lot more from this film than I expected. So I would say to give this film a chance. It is a rather deep film, in the guise of a simple, teen comedy.

After unexpectedly losing his beloved dog Sparky, young Victor harnesses the power of science to bring his best friend back to life - with just a few minor adjustments. He tries to hide his home-sewn creation, but when Sparky gets out, Victor's fellow students, teachers and the entire town all learn that getting a new "leash on life" can be monstrous.

A stop-motion animated film, "Frankenweenie" was filmed in black and white and ... more...