« The Story of Bo and the Circus that Wasn't review 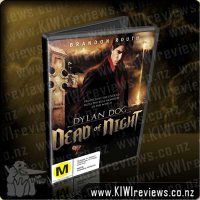 No Pulse? No Problem.

Dylan Dog used to be a supernatural detective, who would go where the living dare not - until tragedy struck his life and he retired in disgrace. Now, he hunts cheating spouses for chump-change.

When the supernatural once again strikes close to home, Dylan comes out of retirement... with a mission. Now, armed with a lethal array of wood- and silver-tipped bullets, and an edgy wit, Dylan must solve a series of bizarre murders before an epic turf war erupts between Werewolves, Vampires and Zombies, that will not only threaten the peace, but also the carefully hidden secret of their very existence.

Based on the popular comics books, this inventive comedy will slay you.

We sat down last night with a mate to watch Dylan Dog: Dead of Night. Now, we are all fans of the monster genre. We regularly watch True Blood, have all of Angel on DVD and delighted in the TV show Dresden Files (about a wizard who works with the police on supernatural cases). So with all this in mind, we thought as awful as some reviews have been of the film it could still be worth watching.

Well, it took some time for me to warm to this film. The dialogue was a bit stilted at first. It's quite cliched and predictable. I half expected, with this being a film noir take on the supernatural side of things that he would even break out the "of all the offices of all the private detectives in this town, she had to walk through mine".

But you know what, it was also really funny. I'm not sure it was always meaning to be, but I did giggle a lot through it. And once I turned my mind to the idea that I was watching a comedy, it was a decent watch.

It's never going to be a film that blows your mind or goes down as a classic. But it is watchable. I don't know that any of us would have paid to see it. But if it was on TV we would watch it again. My husband said it reminded him a bit of the Supernatural TV series as well. I did like the different take on zombies as well.

There's probably a good vampire/werewolf/zombie film noir to be made, and given the recent market saturation of all things supernatural it's surely only a matter of time. Unfortunately, Dylan Dog: Dead of Night is not that movie. Based on an obscure comic book, Dylan Dog follows New Orleans private investigator Dylan (Brandon Routh), a man with a secret past as the mortal broker of peace between the vampire and werewolf clans that live among us. Following an attack on his friend/partner Marcus (Sam Huntington), Dylan comes out of retirement to investigate the murder of a prominent businessman who may or may not be trying to reincarnate a powerful demon. If it sounds daft and convoluted, that's because it is. Dylan Dog is a badly written, woefully miscast mess that plays like a third-rate Buffy the Vampire Slayer episode stretched to 100 minutes, and minus all of the Joss Whedon charm.

It would be easy to blame this mess on leading man Brandon Routh, as his Dylan is such a remarkably bland character, but to do so would be a little unfair. Routh, best know for Superman Returns, has shown on a handful of occasions that in the right role he can shine, yet his casting as Dylan just completely misses the mark. There's too much all-American, schoolboy decency to Routh, where this character would have worked much better with more edge. The only bright spot of the film is Huntington as put-upon sidekick Marcus, and the chemistry he shares with Routh, much like in Superman Returns, elevates their scenes together above anything else in the film. Sadly though, it's not enough to save Dylan Dog, as the increasingly confusing plot twists and 80s level special effects continue to pile up yet generate nothing interesting. The film was clearly green-lit in an attempt to cash in on recent trends, particularly the success of HBO's True Blood, given its similar setting (and the fact that characters repeat the phrase 'true blood' ad nauseam), but unsurprisingly a potentially interesting idea is left to wallow in b-grade hell. Perhaps some of the underdeveloped ideas in the film (zombie support groups, 'body shops') work better in the comic, so it's a shame that the near total failure of Dylan Dog is unlikely to inspire anyone to seek out the books.

Even the smallest of light... shines in the darkness.

Will Stanton learns he is the last of a group of warriors who have dedicated their lives to fighting the forces of The Dark. Travelling back and forth through time, Will discovers a series of clues which lead him into a showdown with forces of unimaginable power. With the Dark once again rising, the future of the world rests in Will's hands.