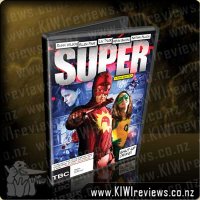 When Frank's wife leaves him for Jacques - a seductive, psychopathic drug dealer - Frank is transformed, and quicker than you can utter an appropriate expletive, The Crimson Bolt is born.

With a super, red, hand-made super suit, a wrench, and a crazed sidekick named Boltie, The Crimson Bolt beats his way through the mean streets of crime in the hope of saving his wife Sarah... that is, if she WANTS to be saved.

The rules were written a long time ago: You are not supposed to molest children, cut lines, or key cars. If you do, prepare to face the wrath of The Crimson Bolt!

My husband and I just sat down to watch James Gunn's Super. We were expecting to see something a little along the same lines as Kick Ass. The story line follows an ordinary guy (Frank, played by Rainn Wilson), with little in the way of happy memories through his life. His main source of happiness is his wife, Sarah (Liv Tyler). But before long, she leaves him for a suave drug-dealer (played by Kevin Bacon).

Frank deals poorly with the reality of being Sarah-less. Depression hits, and as a way of clawing back to reality, he becomes obsessed with super heroes. Mostly though, he just wants his wife back.

This whole film is shot in such a gritty real way - use of the handheld cameras, natural light. The script and the frames seem so haphazard, like a documentary but without pretending to be one. The characters are all flawed in some way. I'll be honest, I hid behind a pillow for much of it. But I'm a bit of a whimp that way.

Overall, we felt this was a pretty good film. It was funny in its awkward characters and situations. They got a pretty cool cast, including some biggish names. It made you think at least a little about what one might consider "evil". I don't know that I would pay to see it in the cinema as the action was fine for TV, but I would definitely recommend it to several of our friends who are into superhero movies and like subversive films.

The past few years have seen an emergence of somewhat dark, subversive superhero films such as Kick Ass and Defendor, with the newest entry being writer-director James Gunn's Super. Rainn Wilson plays Frank, who takes on the alter-ego of the Crimson Bolt following the departure of his heroin-addicted wife Sarah (Liv Tyler), donning his homemade costume and wielding a tyre iron to fight for justice against the evils of society. After generating some interest from the news media, Frank unwittingly attracts the attention of the young, foul-mouthed sidekick wannabe Libby (an excellent Ellen Page), and the duo begin to formulate a plan to 'rescue' the estranged Sarah from the clutches of small-time local drug dealer Jock (Kevin Bacon). Betraying Gunn's z-grade beginnings working for Troma Entertainment (even featuring a blink and you'll miss it cameo from Troma maestro Lloyd Kaufmann), Super is a micro-budget, violent, and darkly comic affair, putting a unique spin on the real-world superhero formula. Also of note for fanboys and girls is the presence of geek icons Nathan Fillion and Linda Cardellini in small but memorable roles, adding to Super's charm and credibility.

The film is fun, but some may see it as a movie of missed opportunities. So many indie films deal with issues of depression and heartbreak, and with Super, Gunn had the potential to deal with these concepts in a wholly original way, which initially it seems like the film is trying to do. Frank's transition from loser fry cook to masked vigilante is clearly an escape from his crippling depression, and coupled with his bizarre visions of religious icons, leads to delusions of grandeur betraying a deeply disturbed individual. Indeed, all of his attacks on the criminal fraternity, while arguably coming from a noble place, truthfully make him nothing more than a criminal himself, and perhaps a much more dangerous one than the people he chooses to fight. After lashing out at a couple for doing nothing more than disobeying common courtesy, Frank begins to doubt his ways, but Gunn chooses to abandon any larger questions, instead opting for a more outlandish path for the story. Still, Super is intended to be a comedy, and in that respect it works well. Maybe I'm reading too much into it, but personally if the story had continued into darker, more serious territory I think it could have had greater impact.

J discovers that there are secrets to the universe that K never told him - secrets ... more...