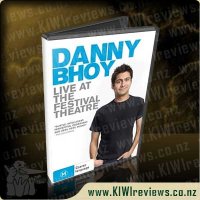 Danny Bhoy is one of the most in-demand stand-ups on the planet. A natural gift in storytelling combined with a razor-sharp wit makes him one of the most unique and exciting comedians to emerge in the past few years. Recent appearances on The Late Show with David Letterman and Live at the Apollo tell only part of the story. Over the past decade, this young Scot has quietly built a huge global following on one of the most reliable social media platforms of all, word of mouth.

This DVD features a special performance on his return to his home city of Edinburgh. Filmed at the prestigious Festival Theatre it features material taken from his past 2 highly acclaimed shows 'By Royal Disappointment' and 'Messenger (Please Do Not Shoot)'.

SPECIAL FEATURE:
•  Behind the scenes at the Edinburgh Festival Theatre

Americanised slap-stick humour has never held much appeal for me. The dry, British wit - shared by a large percentage of what has at one time been part of the Commonwealth - holds far more entertainment and enjoyment, mainly because of it's intellectual components, where one has to think about it to find the multiple levels of 'joke'. Thus, Danny Boyle had me sniggering and giggling, and outright belly-laughing in places.

A worthy successor-in-action to [s=billy+connolly">Billy Connolly, who seems to be far more of an actor than a stage-comedian these days, Danny is a self-admitted half-Scottish, half-Indian crackpot, who has the ability to make the audience crack-up. Danny even has Billy's trademarked 'rambling off ion hilarious tangents, then snapping back to the main point' performance styledown pat. The accent, mannerisms and topical anecdotes make him a great live act which translates very well to a pre-recorded format.

Though this is only my first encounter with Danny's act, it was a great opening gambit for me, which had me watching the DVD twice back-to-back, then spending many hours of 'work time' diverted into side-splitting YouTube searches for clips and snippets of this talented young man in action. He joins the ranks of 'awesome comedic talent' in my books... a list that includes the previously mentioned 'Big Yin' Billy Connolly, Australian comedian Carl Barron, and our very own icon Billy T James.

Overall, this is a great DVD... and my only gripe was that it only lasted 71 minutes. I could easily have tolerated 3 hours of this clever, witty chap.