Doctor Who: The Day of the Doctor review 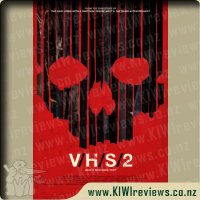 V/H/S/2 is a 2013 American anthology horror film featuring a series of found-footage shorts.

In V/H/S 2, the second film in the VHS franchise, a pair of private investigators break into the home of a missing college student, uncovering a collection of mysterious videotapes that reveal four horrifying films, trafficked by an underground tape sharing community, which lead them toward a shocking resolution to their case. This is modern horror at its most inventive, shrewdly subverting our expectations about viral videos in ways that are just as satisfying as they are sadistic.

When I saw this came up for review I happily put my hand up as hubby loves horror movies, I'm finding them ok now and we had watched V/H/S/ and hadn't thought that it was too bad so figured we'd give this one a try. Well.... um...... Now I have to write a review from it and 'it was crap' just doesn't cut it.

In this film we have a similar premise of a couple of people entering a strange house and finding a tonne of VHS tapes lying around, as they play them they watch very odd things and then, of course, discover something just as strange is happening around them. I will just say that I liked the feel of the first film as the clips felt like small, isolated events that could have happened, but it didn't feel like that with this one helping it to be a bit of a let down.

Going again with found footage type of filming, we have a camera strapped to a bike helmet, a camera in a prosthetic eye implant, a camera mounted on the back of a dog and handheld cameras plus those that get hung on your top pocket. This enabled them to come up with some new ways of doing things which wasn't too bad.

In this lot of films we have a mans who's new, clinical trial model, prosthetic eye causes him to see the dead, I thought that this one was ok, but nothing special. Next we have a man out biking who gets turned into a zombie, I rather liked the take on the different perspective but being sick at the time didn't like the gore.

A cult attempting to awaken the 'devil' and mass suicide reign supreme and whilst it had me sighing a lot over it and moaning and zombies again, I had to have a little chuckle at the end of it. Then there was a camera on a dog and aliens involved, again, not too bad but a bit too long. And the of course the final round up of the in between parts which had more zombies.... :/

This was ok but I felt a bit let down when out of 5 stories, 3 of them were basically zombie flicks, and none of them felt plausible of having happened due to three stories having the similar theme. I'm in no rush to watch this again and sure am glad I didn't pay to watch it.

When Pete and Ellie decide to start a family, they stumble into the world of foster care adoption. They hope to take in one small child but when they meet three siblings, including a rebellious 15 year old girl, they find themselves speeding from zero to three kids overnight.