ProdID: 1789 - I Am Legend
Directed by Francis Lawrence 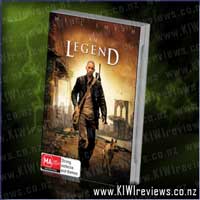 I Am Legend product reviews

The last man on earth is not alone.

Somehow immune to an unstoppable, incurable virus, military virologist Robert Neville is now the last human survivor in New York City and maybe the world. But he is not alone. Mutant plague victims lurk in the shadows... watching Neville's every move... waiting for him to make a fatal mistake.

Perhaps mankind's last, best hope, Neville is driven by only one remaining mission: to find an antidote using his own immune blood. But he knows he is outnumbered... and quickly running out of time.

I watched this because my husband was keen on seeing it.

I'm not a particularly big fan of Will Smith as all his movies seem very self centred, all about him and his character, but I sat down to watch this because my husband likes a good end of the world movie. The 'zombies' didn't look that great, the only time I liked the look of them was right at the very end, but every time before hand they just didn't look that real and so it really let down the feel of the movie.

There isn't much needed in the way of acting, Smith just needs to act moody and annoyed at life in general. As for the others, there wasn't much needed there either, but they all did a good enough job. The storyline was very basic, it was a take on The Omega Man, but I didn't really like this take on that movie and only put up with the movie (several times) because of my husband and his enjoyment of end of the world scenarios. The special features gives us an alternate ending and I have to say that I much prefer the alternate ending to the ending that made the final edit.

Not a movie I want to watch but I put up with it.

Over the years I have seen more then a few post-apocalyptic movies, where there are zombies, dragons, radioactive mutants, aliens... you name it... but this has to be the first time I have seen an 'end of the world as we know it' movie that has a cast of millions of humans, but none that would still be classed as human.

The movie opens with a TV interview cameo with the ever-popular Emma Thompson as a genetic engineer who has rewritten the Rabies virus to be a cancer-killer. Little did she anticipate that the virus would do what virii have done for millenia... mutate and evolve into something even more nasty. Now there are 2 strains of the virus and they are both nasty. One is airbourne, and will affect almost everything primate, the other can only be contracted by fluid transfer, like spit in a bite, and it'll infect anything alive.

Now, humanity is reduced to a lone surviver, and a city full of rabid monsters that were once human beings. They don't like the sun, "...it burnses us..." (

Sorry, couldn't resist that), so they only come out at night and live in shadows, but they kill and eat anything and everything that wanders past, or into, their lairs. And they ain't as dumb as they are cabbage looking.

Will Smith brings his usual style to this role, showing us what it would be like to live in this world after losing everything but hope, and his hidden underground laboratory. He scavenges for food in a deserted city, with his outings ruled by a very strict schedule, for if he doesn't make it home in time to lock up, he's going to be the mutants' next meal.

Overall, this movie has a lot going for it, despite some weak special effects and a hefty dose of predictability in the plot department. A couple of surprises thrown in keeps it from being an utter flop, but even they only spice things up for a few minutes at a time. By far the biggest 'positive' this movie held for me was the warning against genetic engineering without proper safeguards, and messing around with the world's smallest but most deadly killers, the virus family. Worth watching at least once, so be sure to hire it. If you like, then be sure to buy. Remember, only pyromaniacs burn.

From the creators of Shrek and Madagascar comes the funniest movie of the year.

Prepare for awesomeness with Dreamworks Animation's Kung Fu Panda. Jack Black is perfect as the voice of Po, a noodle-slurping dreamer who must embrace his true self - fuzzy flaws and all - in order to become the legendary Dragon ... more...