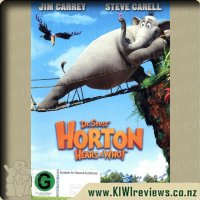 Horton Hears a Who! product reviews

The makers of ICE AGE, and comedy giants Jim Carrey and Steve Carell, bring to life DR. SEUSS' beloved HORTON HEARS A WHO.

An imaginative elephant named Horton (Carrey) hears a faint cry for help coming from a tiny speck of dust floating through the air. Although Horton doesn't know it yet, that speck houses an entire city named Who-ville, inhabited by the microscopic Whos, led by the Mayor (Carell). Despite being ridiculed and threatened by his neighbours who think he has lost his mind, Horton is determined to save the particle... because "a person's a person no matter how small."

I was a bit skeptical at the idea of 'Horton Hears a Who'. While Dr Seuss certainly has created a wonderful world with rhymes, the film adaptation of 'Cat in the Hat', left a lot to be desired. But seeing this film would be completely animated, I gave the movie a chance to entertain me.

I rather enjoyed this film, and so did my friend's 4 year old daughter. The film clearly showed who were the 'good' and 'bad' characters, so there was a lot of shouting at the screen from the little one. Brightly coloured, and encouraging an understanding and respect for the unknown, I approve of its messages. I particularly enjoyed the fact that the 'bad' character wasn't vilified. It showed how barbaric people could be when they follow a group without thinking for themselves, and the need to be compassionate towards everyone because 'a person's a person, no matter how small".

The writers have done well to expand upon the rhymes of Dr Seuss, and come up with enough intertwined side stories to flesh out the plot. A great film with a great moral, and a story that the children will love to watch again and again. Definitely an addition to my DVD collection.

As one of the many who grew up with Dr Seuss I was most excited to see the trailer for Horton Hears a Who.

Horton is an elephant who one day hears the voice of a person, upon some investigation he finds out that there is a world of people on a spec of dust that has landed on a flower, on this world is the Who's and since no one will believe him it is up to Horton to save the day. The great thing is that whilst there is Horton trying to get everyone to believe his story, there is the relationship between the mayor of Whoville and his son and him needing to see that maybe being mayor isn't all that there is to be.

The animation is really well done, everything is really done well and so cleanly, it looks really really good. The voice actors do a great job portraying their respective characters, Jim Carrey as Horton, Steve Carell as the Mayor, the only one I don't like (and that's because I find him annoying in any role he has played) is Jonah Hill, as Tommy, but luckily he's a very minor character so I don't have to put up with him for long.

All in all a great rendition of a classic Dr Seuss story.