ProdID: 69 - The Matrix : Revolutions
Directed by Andy and Larry Wachowski 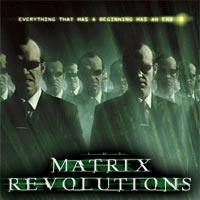 Disclosure StatementFULL DISCLOSURE: A number of units of this product have, at some time, been supplied to KIWIreviews by the company for the purposes of unbiased, independent reviews. No fee was accepted by KIWIreviews or the reviewers themselves - these are genuine, unpaid consumer reviews.
Available:
5th November

Now displaying a greater confidence in his own power, Neo fully realizes that he is a superhuman figure capable of amazing feats, and is totally aware that he's able to see the codes of people and things with which he comes into contact. Simultaneously more humans, who are struggling to live in the real world, have awoken out of the Matrix. As their numbers increase, the machines invade Zion, the center of human resistance - considered the last real-world city.

The battle is on! "It ends, tonight, one way or the other, Neo."

After a slight disappointment with Matrix 2 (Reloaded), I was really glad to see the seamless special effects in this installment. The storyline read well, ran smoothly, and didn't jump around as much.

With this movie focussing on the three major battles happening at the same time, in 3 different worlds, it was quite a feat to keep it all untangled, but they did a great job of it really.

Battle 1: Zion
The machines are about to break through the barriers, and will wipe out every living human soul. They are also killing the humans awakening from The Matrix, stuck in their neon-pink goo-pods in the power stations. It's time to fight back and return the machines to the scrap metal they were formed from. As one character put it, "It's pissing metal out there!" But, there is a traitor in their midst, and he's not quite who he appears to be.

Battle 2: The Matrix
Agent Smith has replicated himself to the point where he is the only sentience left in the Matrix... except for Neo, who must defeat Smith in order to fulfill his new destiny. Smith has all the memories, abilities and knowledge of all those he has overtaken. He is now a truely formidable opponent. Despite Neo now being certain of who and what he is, is he enough to stop a billion Smiths?

Battle 3: The Machine World
Neo must reach the Machine City and speak with the main central intelligence of the Machine Civilisation. He has a deal to propose... Peace. But what can you offer a machine mind that spans an entire planet and is hell-bent on destroying Zion and all the humans not still trapped in the Matrix? And why has the Oracle changed, and is now disobeying her own programming?

It's all one big nasty mess, and only one man can save humanity, but he needs all of free humanity's help to do it. Can Neo save us all?

I have to agree, this is the best of the three movies. With enough twists to satisfy even the most jaded viewer, and a storyline that reveals everything while at the same time hiding it from plain sight, you just have to love this one. Well worth seeing twice, just to pick up the subtle bits you would have overlooked the first time you saw it. This one will be added to my collection for sure!