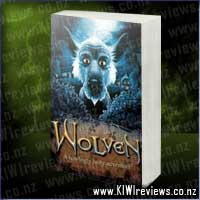 WOLVEN is a fantasy firmly rooted in the mysterious present. A boy and his eccentric grandparents live near a strange wood - apparently cursed. He longs for a dog - but the dirty ungainly farm creature finally found by his grandfather hardly fits his image of the perfect pet. And it howls in the night.

But it's only when his dog starts to grow human ears that he realises that something is seriously wrong. The truth is stranger than his wildest dreams...

Wolves of the Beyond - Star Wolf
Rating: 7.8

From all the little chickens at the Chicken house, Wolven is a howlingly good story that you are sure to enjoy. I thought that the lenticular print on the front cover was interesting as it showed Woody going into Wolven form and back again. With there being a lenticular print on the front cover, it was almost too hard to resist looking at it every time I picked it up to read. As well as there being Wolvens in the story, there were also Werewolves in it, which added to the book being cool because of the image on the front cover.

I thought that the book was so awesome that as soon as I had finished reading it I had the urge to read it again. When I was getting near the end of the book something weird happened to Nat Carver's bully, a boy named Teddy Davis. When he transformed into a Werewolf, his eyes went yellow, and I didn't know that Werewolves had yellow eyes. The end of the book was rather confusing because I had no idea if Nat became a Wolven or a Werewolf, but I'm hoping he became a wolven because I think that Werewolves are mean, cruel and heartless creatures. I found the part where a Werewolf named Lucus Scale tried to capture Woody because of a stupid experiment quite scary, as the author made the book so realistic that I could almost feel the fear that Nat and Woody felt when they were being chased by a couple of Werewolves.

At first I found the book quite boring, but like most books I've read, it got better and better and soon I found it full of action and enjoyable to read. The book ended with such a bang that I'm hoping the author will make a sequel to this one, because if he does, I would want to read it ASAP! This book is one that is crammed full of action and danger, it's something you can't miss.

A quick, easy read for children and early teens that left me pleasantly surprised. Wolven was a cute and amusing story about a wolf who turns human at the full moon and a human boy who becomes his best friend. The thing that impressed me most was how well the 'wolven' character, Woody, blended into the setting and surroundings. I could easily imagine a poor, lost wolf boy living in Temple Gurney - a town a few miles out of London.

Woody was, by far, my favourite character, though I admit the commando tactics of the ex-army nurse and now old lady - Ophelia - had me in giggles at various places through the story. The only downside was that the bad guys were equally comical and seemed like a bit of an afterthought. Then again, maybe that is good in a story aimed at this age group. It certainly wasn't scary.

Good, fun read, especially for young boys about 8-11. I wouldn't have thought children that age up to reading books this size until I saw who reads Harry Potter and wow, I need to give kids more credit!

Amy only has a few days to live - unless she can find the ingredients for the antidote. Can Dan stop Evil Pierce before it's too late? The heart stopping finale to the 39 Clues: Unstoppable series