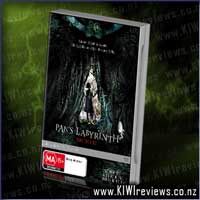 A fanciful and chilling story set against the backdrop of a fascist regime in 1944 rural Spain. The film centers on Ofelia, a lonely and dreamy child living with her mother and adoptive father; a military officer tasked with ridding the area of rebels.

In her loneliness, Ofelia creates a world filled with fantastical creatures and secret destinies. With post-war repression at its height, Ofelia must come to terms with her world through a fable of her own creation.

It takes a lot to get my husband to watch a subtitled movie, or at least it did way back when this came out on DVD, thanks in part to Pan's Labyrinth, he's happy to try one every now and then.

I rather like Guillermo del Toro and the creatures that he helps to create, they are both disturbing and pretty darn stunning at the same time, which can be hard to achieve at times. These creatures gave you the creeps but it was the young girls step father who really gave you the shivers.

The acting in this was amazing and fully believable. It really had my feeling for young Ofelia and the life she is living at the time, hoping she would get free of it somehow. Even though it has been 5 years since I saw it last this film has stayed in my memory, not many movies do that for me.

Don't expect an easy ride with this movie, it really pulls you in and gets to you, but, you won't regret watching it at least once.

I really wanted to see this movie when it came out. It was an art film, and highly regarded. It was subtitled and I do get a special kind of pleasure from foreign film. They are often filmed to provoke discussion so their endings are very open to interpretation.

On the other hand I had heard it was disturbing. It involved children and I had just become a mother at the time, so I was a little apprehensive. It also involves war. While I knew it would have an anti-war message, sometimes that is worse because they show why war is bad and I don't need convincing.

Watching it was one of those moments for me. Sometimes a film grabs you, and doesn't let you go. It teaches something to you, about the things you will or won't put up with. The relationships in this film tore at me. I deeply loathed the father figure. I wanted to wrap the children in a blanket and help them escape his clutches.

The emotions I felt all the way through were raw and difficult at times. Yes there is the fantasy aspect, the escapism between the horror. And ultimately it offers some possible hope. But when the movie finished, I was emotionally drained. I would never see this again. Not because I felt it was terrible, but because of how it made me feel. It taught me the lesson it was supposed to. That was enough.

This is a great film, hence the high marks I give it. But you need to be ready for that emotional roller coaster. This is not a relaxing movie.

Well, one of my biggest concerns with getting this movie on DVD after having seen it on the big screen was again the subtitles. It had been ok on the big screen as they were easy to read without having to sit up close and end up losing out on bits of the movie. I was worried that being on a smaller screen, it would make it harder to focus on the movie itself. Not so. Again the movie grabbed my attention from the start, and the subtitles just weren't a problem.
However, I had forgotten just how- brutal- some parts of the movie were, and I would advise that if you are at all squeamish with brutality, then there will be parts of this movie that you will seriously want to turn away from. Watching someone's face being smashed to a bloodied pulp is not something you want to see when you've just eaten!!! However, the actual storyline of this movie is strong enough that it's easy to get past things like that, and just get lost in the fantasy that Ofelia builds up around her in an attempt to escape what's happening in her real world- but is it really JUST a fantasy?? Once again, when this movie finished, I was left wondering whether it really was all just in her imagination. The special effects are fascinating, and the music suitably haunting, so that despite having already watched this a few times since getting the DVD, I have yet to get bored with it.

A chillingly disturbed movie, full of civil war attrocities and fanciful journeys into a world of satyrs and mythical creatures of all kinds, this movie was in places, for me, a trip into the outer realms of WTF?!

I found the special effects to be of stunning quality, utterly top notch in all regards, however some of the themes they were used in gave me the screaming heebies that night as I tried to sleep. I am not normally prone to bouts of insomnia brought about by 'scary movies' but some of the scenes kept flashing behind my eyes as I started to doze off. One scene in particular really got to me, not because it was a scary fantasy scene... far from it, it got to me because it was all too real. I hope I never come across a military sadist in the middle of the night with a bottle of wine in my bag!

Overall, this movie was a little too disturbing for my tastes, and I can clearly see why it earned an 'R' rating from the censors. Watch this one at your own risk!

A great mixture of dark fantasy, fairy tale, and horror, Pan's Labyrinth drew me in from the opening scene, and refused to let go 'til the credits started to roll. When it first started, and the characters were speaking in Spanish, with subtitles popping up, I'd simply thought that it was starting off with a bit of "history" to give the story background-. But no, it continued in Spanish, with subtitles. I will admit, I was a little worried by that stage, although I was already enjoying the movie, as I normally really dislike movies in other languages, and I find having to read the subtitles takes a lot of the enjoyment away from the viewing, because you're constantly focusing on the words popping up on the screen rather than just the movie itself. However- that was NOT to be the case with this movie. After a while, I was barely even aware the words were appearing on the screen- I was still reading them of course, but it just became automatic as I became immersed in the movie. As I left the cinema, I heard a few of the other viewers commenting about it being a bit too dark for their tastes, and I will admit, it had a good dose of "dark moments"- a fairytale twisted into almost a horror movie, with a cold blooded killer, (who reminded me very much of a Spanish Hitler) determined to wipe out a group of rebels, giving it even a hint of "war movie" in places.
This is, most certainly, one that I will be heading out to buy on DVD the INSTANT it comes out, and I'm sure it will be watched many times!! If you enjoy anything in the fantasy genre, or even enjoy movies that could be classed macabre in nature, then Pan's Labyrinth is well worth seeing- and even worth the full price, instead of saving it for a "cheap" night.

Thirty years ago, Clifford McBride led a voyage into deep space, but the ship and crew were never heard from again. Now his son - a fearless astronaut - must embark on a daring mission to Neptune to uncover the truth about his missing father and a mysterious power surge that threatens the stability of the universe.