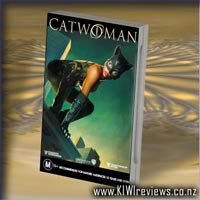 Disclosure StatementFULL DISCLOSURE: A number of units of this product have, at some time, been supplied to KIWIreviews by the company for the purposes of unbiased, independent reviews. No fee was accepted by KIWIreviews or the reviewers themselves - these are genuine, unpaid consumer reviews.
Available:
13 January 2005

Catwoman is the story of meek, mild-mannered artist Patience Philips, who works for Hedare Beauty, a mammoth cosmetics company on the verge of releasing a revolutionary anti-aging product.

When Patience inadvertently happens upon a dark secret her employer is hiding, she is attacked and killed. But Patience is given a second chance - a second life in which someone not quite human resides. Someone with the strength, speed, agility and ultra-keen senses of a cat.

With her newfound power, Patience becomes Catwoman, and sets out to stop Hedare's callous plan to unleash an appallingly dangerous product into the world.

This film was incredibly frustrating for me to watch. While I do love my heroes and heroines, the computer generated effects from the Hulk were abysmal, and I had hoped to see a lot more actual actors in Catwoman. Unfortunately, despite casting Halle Berry as the lead title character, the majority was computer generated.

Clearly, with the rapidly advancing technology, it was only a matter of time before stuntmen and women would be pushed aside, in favour of CGI. But I find that Catwoman and the Hulk create a great counter argument against such a move.

The movie itself was graphically very shiny and sleek, but ultimately, the Catwoman came off looking more rubber-like and freakish than one would have hoped for. The plot in itself is an origin story, which is generally hard to stuff up; but it did not seem to follow any of the comic books versions or remakes.

Don't get it twisted. This is an awful film.

Halle Berry can't take full blame for the reason why this movie sucks, the script was juvenile and corny. She plays Patience Williams, a timid beauty ad designer who accidentally stumbles on to an evil plan by the owner of the company she works for. The evil plan involves marketing a beauty cream that is known to cause skin disorder and cancer. Patience is chased out of the building and into a drainage system where she falls to her doom and is revived by a cat.

This movie is humorously bad. Her origin with the cat that revives her is laughable. The way she walks so awkwardly (like she's had one too many catnip) in that tacky cat suit is a riot, the fight scenes as well as the dialogue is laughable too. The most funniest and probably the worst scene in the movie is where she beats her soon-to-be boyfriend/cop in basketball with HIGH HEELS ON!!! She looked like a total goof dribbling that ball between her legs. Then there's those moments in the movie where you have to suspend your intellect like the time Halle slid through those prison bars without getting stuck or the fact that the toxic cream that the main villain is peddling makes her(the villain) immune to punches and kicks that would knock the average person unconscious.

The acting is dreadful and the action is a joke.

After being resurrected by an ancient Egyptian cat, cosmetics industry designer Patience Phillips (Berry) turns from shy, badly-dressed punchbag into the vengeful, powerful Catwoman. Employing her feline powers, Phillips seeks rough justice for those who killed her...
Like Van Helsing with a smaller budget, this is only worth seeing if you can handle shallow characters and dull, plastic action scenes for the sake of unintentional laughs.
I rented this movie because I was expecting like a x-men movie or Elektra or something like that.......but what I got was the worst marvel movie ever made.....if it weren't for the hulk this would be the worst super hero movie ever.....in other words it stinks!!!
Berry's scenes with Alex Borstein play like a bad Fox comedy, while the CGI-laden sequences in the film often bring to mind cut scenes from a PlayStation game. Indeed, what is Hedare but the final boss in a videogame that plays itself? Pitof's visuals, while not original, are appropriately inhuman in their anxiousness. The same can't be said about the film's soundtrack. What with all the urban music used in the film to underscore the cheesy games Berry and Benjamin Bratt play with each other (on and off a ghetto basketball court), Catwoman sometimes feels as if it's been pieced together from a dozen or so Ally McBeal parodies trying to pose as hip-hop videos. I suppose one could argue that Pitof is to be rewarded for working into this film about sparring dualities an aesthetic that suffers itself from an identity crisis: the images think white but the soundtrack thinks black.

After the B-Grade hatchet jobs done to other Comic heros in recent movies (including Hulk, Hellboy, and some of the later Batman movies) I flat-out decided to wait until it was available on hire before I would hand over a single dollar.

Kinda glad I did really... though this was a surprisingly entertaining movie, I could not help but be niggled by some of it. The CGI scenes were, from the point of view of someone who has dabbled with CGI and found it almost impossible to get any decent results, a technical masterpiece... but they just didn't flow right, and were slightly overdone in places. This took a bit of the shine off them, making them less than they should have been.Some of the corny one-liners made for groans from this side of the screen, again taking something away that didn't need to go. Good dialog is vital to a SpFX-Special, otherwise you end up with a 'ham-&-cheese-on-whitebread' like Independance Day.

Ignoring plot holes and over-acting, the technical level of this movie was stunning! Not up to full spec by any means, but hey, it would take a few extra 0's on the end of the budget limit to really do these acrobatics justice. A bit like stetching a Sedan when a Limo isn't available... a compromise, but not the worst outcome by any means.

Overall, not bad for what it was at all. A bit corny, a bit limp in places, but still a strong contender for 'a good night in with the partner'. Warning: Contains highly inflamatory Feminist commentary, thinly disguised. Guys, deal with it, it's a quick shot and all over... think of it as an immunisation of sorts I guess. :)

A post-apocalyptic ice age forces humanity's last survivors aboard a globe-spanning supertrain. One man (Chris Evans) will risk everything to lead a revolt for control of the engine and the future of the world.