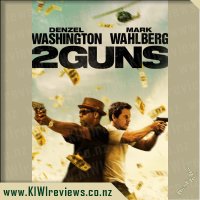 A DEA agent and a naval intelligence officer find themselves on the run after a botched attempt to infiltrate a drug cartel. While fleeing, they learn the secret of their shaky alliance: Neither knew that the other was an undercover agent.

Denzel Washington is one of those great actors who has, for some reason or another, refused to be a part of a sequel. It leads to his movies being a big unknown. You can never tell if it will be a great film, or a horrible one. Lucky for us, Denzel is a high quality actor, so you will more often than not be treated to a great original film.

This film, has a lot more good than bad in it. While it is far than safe to say it is a brilliant 10/10 film, it was more than enjoyable and it wasn't overly cliche. His co-star, Mark Wahlberg was very much in a similar role to what he is usually cast in, but was a lot less "angry and confused". The film fits well in the action genre, and has many unseen twists and turns that keep you guessing as to the outcome.

My only real issue with the film is the overwhelming number of antagonists, which although it kept you thinking, it made the film far too convoluted. In real life, this film would have been a lot shorter, and a lot messier. But despite the protagonists ability to escape from harm, the film is far more realistic in many of the character's personalities.

This film is effectively a deathmatch; DEA vs. Cartel vs. Military vs. CIA but it was certainly fun to watch

An amazing story of friendship and survival.

Awful weather and a terrible accident force the members of a scientific expedition to evacuate Antarctica. And survival guide Jerry must leave his team of beloved sled dogs behind to survive the most unforgiving winter on the planet.

Driven by unwavering friendship and belief in one another, the dogs and a heartbroken Jerry - who will stop at nothing to rescue them - make an incredible journey to reunite in this triumphant and inspiring movie the whole family will treasure.