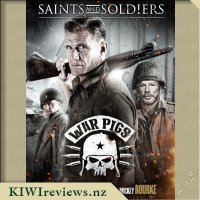 At the peak of the WWII and the allies advance against Nazi Germany, a disgraced US Army Captain, Jack Wosick, is "volunteered" by a Major A.J. Redding to train a rag tag unit of misfit soldiers known as the "War Pigs." Jack is to prepare them for select and secret missions against one of Hitler's Super Weapons: the powerful V-3.

To get his unorthodox assignment accomplished, Redding pairs Jack with a battle hardened German born French Legionnaire, Captain Peter Picault. Together, they are ordered to train the War Pigs into a functioning reconnaissance unit. This movie has all the prerequisites that you would expect for a successful war film; you have allied soldiers fighting against nazi soldiers, a ragtag team of misfits, unlikely odds, implied nudity, the death of a close friend in an emotional way, a couple of well known action heros, and the mentality that attacking fixes everything. But it just doesn't gel together right.

Perhaps it is the beginning of the film containing what would generally be considered as the climax of most other war films, and creates a rather forgettable scene that gets referred to over and over again throughout the film. Perhaps it's being thrown together with a close knit unit that already exists with comradery and an apparent history that I know nothing about. Not being immersed in the initial training, and just being expected to believe a few training montages would make things right, made it hard to properly empathise with the group.

There were several other issues, such as rather obvious computer generated blood splatter effects, a lack of an proper villain that provides a challenge, and the general pacing of the film (it spends a long time building up for a single mission). But overall the film was rather well shot.

The environment was convincing, and the filters used gave a vintage feeling to the film, which worked well with the genre. Many "messy" filming shots were used which again helped with selling the hectic and unpredictable nature of war.

The audio and script were less impressive. Generic line after line from other similar films were used, and the volume was too variable, with action scenes so loud that it left the dialogue difficult to follow (and let's be honest, having dolph Lundgren and Mickey Rourke as characters is not helpful to understanding important dialogue).

The film ended up being rather short considering the time taken during the "build up", which left me rather disappointed with the lack of action and continued plot. But once the bullets started to fly, I definitely started to get my interest. The film doesn't overdramatise the deaths (with the exception of one cringeworthy scene at the start), which is something I applaud in films; I hate seeing people getting shot and going on to win wars. More often than not, it's one shot and you're dead. Just like that. No sound, no cry, just crumple to the ground. So I appreciated the bluntness, and in-your-face attitude that the film provided.

So I guess you could say that the film was inconsistent. It varied from realistic to overdramatic, from long and boring to action packed and abrupt. All with a set of actors that failed to sell their roles. Worth a watch? If you enjoy war films, it's worth a go. If you are after a film to make you hate war, feel some strong emotions, patriotic even, or to make you have more respect for soldiers, then it's not really going to do any of those things for you. It feels false, and did not live up to my expectations.

Score: 9.0
Product reviews for listing 7578: War on Everyone
Directed by John Michael McDonagh

War on everyone follows corrupt cops Terry Monroe (Alexander Skarsgard) and Bob Bolano (Michael Pena) as they break the law for a living in New Mexico. Terry is an alcoholic who loves Glen Campbell, and Bob is a closet intellectual who loves his wife and kids.